From the End of the World: Four Scenes after Henri Michaux (2011-07-18) cover story short fiction

Terence Kuch is a consultant, avid hiker, and world traveler. His publications and acceptances include Ante Review, Clockwise Cat, Colored Chalk, Foliate Oak, Foundling Review, Marginalia, North American Review, and many others. He has studied at the Writers Center, Bethesda, Maryland, and the Mid-American Review Summer Fiction Workshop.

It IS there, even though no one will speak of it. It is so near at hand that it can hear us breathe ...

If murder were not a crime, would disposing of a dead body merely be considered "littering?"

If you don't want the end of the world to hit you, you had better stay off the tracks ... but does that really help? 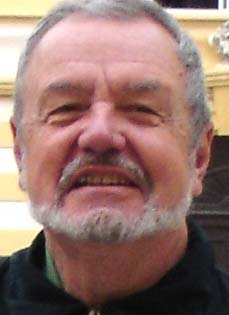 He has studied at the Writers Center, Bethesda, Maryland, and participated in the Mid-American Review Summer Fiction Workshop. His short non-fiction has been anthologized in books published by Random House and McGraw-Hill. He has survived interviews by the New York Times and USA Today.

His irresponsible opinions, on language and other topics, can be found at www.terencekuch.com.