Join the story of The Supermarket, where a committed group of helmet-wearing citizens find fulfillment at the grocery store ...

Naomi the Cashier receives an introduction to the powers that be: Militant Shoppers!

Action! Excitement! Adventure! Get me a 4-wheel drive shopping cart!

What are your inner needs? Peace and job satisfaction, or the knowledge that your house smells like fuchsia blossoms and your car makes you look ten years younger?

Let's go meet Ranger Roy, and this time, get your dang SUV inside the lines!

With these crackpots, you have to be careful -- you never know what they know about what you're thinking!

There's a lot of ways to park, but the only right way is Ranger Roy's way!

Even a super-cashier must rest, perchance to dream...

As long as he doesn't speak in iambic pentameter ...

Is this poem a coming of age story, about children finding their way ... to the cereal aisle?

That's why they keep Hershey bars right beside the check-out ...

And now, the Strange Visions of Mrs. X!

Seriously! Seeing the cellulite on those famous thighs can give you an all-day feel-good boost!

You know what goes good with that? Hot chocolate with extra little marshmallows!

I'll bet you never even said thank you when you pushed your cart through ...

Be mindful when a door instructs you to "Think globally"...

Where can I get a T-shirt like the guy in the second panel is wearing?

There IS something to be said for a steady job ...

And when you find a really good sale price, the feeling is ... heavenly?

Gosh, wouldn't we all?

And Phil, don't forget you'll need some extra milk to go with that ...

I hate those "perkiness" dreams worse than anything!

Uh oh -- she obviously hasn't heard about Hostess yet ...

And at their age, skateboards are a lot more dangerous than shopping carts ...

Conclusion. Happiness and fulfillment are best when shared! 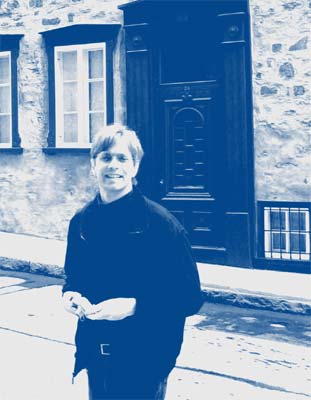 Eric Suhem lives in California and enjoys the qualities of his vegetable juicer. He can be found in the orange hallway (www.orangehallway.com)

Eric Suhem toils in office cubicles at a nameless, faceless corporation by day, and likes to create things by night, whether it's photography, cartoons, or surreal, absurd fiction. Over 100 of his stories have appeared in various online publications.