Surrounded by a world of wonder and intrigue, a young man struggles to come up with a plot for a science fiction story, immune to the marvels around him.

At what point does a person choose to become evil? At the tender age of eleven years, William Blackman had already been made to bear a heavy burden of darkness and given the gift of a friendship of uncommon devotion. Darkness and light -- as childhood's end nears, which path will Blackman choose? Part one of five.

Despite his promise, Blackman has fled his childhood home, leaving ten-year-old Ray Harper behind to witness a taste of both the evil that his friend was forced to endure every day and the brutality that the older boy was able to prevent by his presence. For good or ill, however, Harper's friend is gone, leaving behind nothing but a broken promise. Part two of five.

Seven years have passed, and Blackman has returned once more. Thoughts of the past burn in his mind, but not warm feelings of friendship. Hate and revenge are the driving forces in Blackman's life, and he is willing to strike a bargain with the warlock and serve a demon to further his dark goals. It seems Blackman has chosen his path, and yet no choice is written in stone -- the old school teacher sends an urgent letter to Blackman's childhood companion, begging him to return. Is Harper's simple gift of friendship going to be strong enough to counter the lure of vengeance and power? Part three of five.

Harper has returned to see if his friendship can save his boyhood companion from the darkness that seems to be consuming him. A hair cut, a bath, some clean clothes might change Blackman outwardly, but is there anything to be done to turn the inside away from the evil and hatred he has embraced? Part four of five.

Blackman reveals the depths of evil he carries with him in his heart; evils done to him as well as evils done to others. Despite his boyhood friend's assurances that he doesn't need the burden of that much hate in his life, evil is calling to Blackman, and though the necromancer is dead, the demon who dwelled with Blackman's old master can not be harmed by flames. Caught between the call of darkness and light, to whom will Blackman finally choose to turn? Harper, or the demon that waits in the ruins of the evil sorcerer's home? Part five of five.

Sheraden is just passing through, looking for a temporary job before she heads off world again. A seemingly kind recommendation from a stranger forces Sheraden into a situation that some might call a blessing, but that she regards only as a curse. Part one of five.

The strange stone that's become a part of Sheraden grants her the ability to heal almost any wound, will make her rich beyond her dreams. Shouldn't she be overjoyed? That's just the problem. Part two of five.

Sheraden's symbiont may be a curse, but it's a lucrative one. With a few partners and a ship of her own, Sheraden can seek her father and freedom from the Heart's Blood. But one of her newfound friends doesn't seem to understand that Sheraden can't return his attentions. Will his drastic ploy to break through to her work, or will the Heart's Blood lead to Sheraden's death? Part four of five.

Sheraden continues searching for Alphonse and her stolen heart, growing weaker by the hour. But she isn't the only one weakening -- as she nears death, the power of the Heart's Blood is fading, too. Will Sheraden regain control of her existence again? And if she does, will she regain her humanity? Part five of five.

Extraterrestrials have been kind enough to offer their advanced technology to cure mankind of troubling problems like alcoholism. But some people really just don't want to be helped.

The date was a complete disaster, but Annie knew it would be from the start. She has her magazine to run, and that's more than enough to keep her busy. Part 1 of 2.

He's made his apology. She's told him to go away. End of story? Almost. But then the elevator broke down... Part 2 of 2. 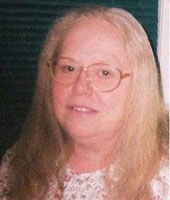 I was born in 1947 in a small town in the very bottom of Missouri. I have worked as a bookkeeper since 1967. When I was six, my family moved us to the Chicagoland area. I wrote for the Star Trek fanzines in the late 70's, 80's and early 90's, and have learned a lot from the editors. I still correspond with many of them.