Shaikh started writing at the age of eight and has since written over two hundred poems. He writes in English and Urdu, and his poems have been featured in international publications. 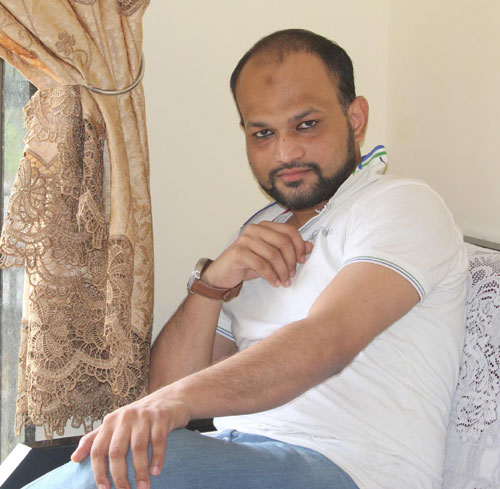 Shaikh started writing at the age of eight and has since written over two hundred poems. He writes in English and Urdu, and his poems have been featured in international publications like Muse India, The Istanbul Literary Review, The Barefoot Review, The Enchanting Verse Literary Review, Emerge Literary Review, Time Vision, Time Mastermind, Kritya Poetry Journal, Frogpond: The Journal of the Haiku Society of America, Shot Glass Journal, etc.

He has published four booklets of poetry namely Poem Twenty Ten, Emma, Daddy and Ibrahim and Bachelor of Arts.

In March 2010, he was diagnosed with Blood Cancer (Acute Lymphoblastic Leukemia). After a duel of months, he survived the disease. Back to normal life, he continues writing. His works have been featured alongside the biggest names in Arab poetry like Adonis and Mahmud Darwesh; and Indian names like Arundhathi Subramaniam, Gopikrishnan Kottoor, K. Satchidanandan, Jayanta Mahapatra and Anita Nair. His poems have also been published or planned to be published in several anthologies such as Overplay/Underdone (Medusa's Laugh Press, 2013), Before There Is Nowhere To Stand: Palestine Israel Poets Respond To the Struggle (Lost Horse Press, 2012), Malala: Poems For Malala Yousafzai (FutureCycle Press, 2013), World Peace E-Anthology (World Poetry Forum, 2013), The Dance Of The Peacock (Hidden Brook Press, 2014), etc.

His first novel The Library Girl was published in 2017 for which he was adjudged the Ne8x Author of the Year 2019. In 2019, The Karadi Tales Company, Chennai, published his first picture book for children titled Letters To Ammi as a part of their Cities Series. The book was shortlisted for the Neev Book Award 2020, adjudged one of the 14 Great Children's Books on Religious Tolerance and Interfaith Harmony by HuffPost India, one of the Top Kid's Books of 2019 by Indian Publishers by The Indian Express and was on the GETTLITT List of Best Children's Books of 2019.

He was shortlisted for the International Capoliveri Haiku Prize 2013 by the Capoliveri Commune, Italy; nominated for the Poem of the Year Award 2016 instituted by SalisOnline Magazine and shortlisted twice for the WordWeavers Short Story Prize in 2018 and 2019. He gained third position in the WordWeavers Haiku Prize 2019. He was awarded the 'Poiesis Award for Excellence in Literature' in 2020 for his acid attack based story titled 'Bhabisa' he had written when he was fifteen. He was awarded the Sahityakosh Samman 2021 and NE8X Book Honour 2021 by the NE8x Online Fest 2021.

Aftab earned his Bachelor of Theology and Master of Divinity degrees in Christian Studies from the International Institute of Church Management, Chennai and a Bachelors in English Literature and Psychology from the University of Mumbai and a Masters in English from Alagappa University. In September 2019, Shaikh travelled to the holy cities of Makkah and Madinnah on a pilgrimage. He is presently pursuing his Doctor of Theology degree in Religious Studies.