Hailing from the quiet, itchy back woods of Pennsylvania, Paula Patruzzi has this to say about herself:"I've been a paper carrier, punch-press operator, 'sales associate', and pipefitters'/welders' helper. Now I'm a writer, which is a lot more fun than the other ones."

You can call it love, or loyalty, or supportiveness ... some people would even call it "weakness," but the one thing that you have to admit about it is that it comes out of the depths of the heart ...

The divergence of Alex' and Michael's spirituality is apparent as they try to celebrate their mutual birthday. Is Michael ready to straighten out his life yet, or is he about to drag Alex down?

Michael has no respect whatsoever for Alex's spirituality. But although Alex knew that, he didn't understand that for Michael, spirituality was as game for turning a buck as selling the Brooklyn Bridge ...

Alex proceeds to try to break his brother's spirit, but won't this maneuver break something in himself, too?

In the Beginning, before there were any Beginnings or Endings, or Befores, for that matter, there was -- or wasn't -- oh, never mind, here's how it all happened...

Plenty to eat, all the world to roam, and the only thing missing is...regret...

A taste for seaweed gets Zan thinking ... in a dangerous direction.

Dreams are supposed to be restful, but when everyday life is full of rest and plenty, dreams can turn to a different path...

In a place that has everything you could ever need, doesn't it just figure that Nar would find things that he just wants?

The thing about the dreams was that Zan and Nar saw things they wanted to see in real life -- and now their world is only about how it can fulfill the dreams...

"Everything that the humans had made or built...seemed to be more bother than it was worth." Listen to the dog, he knows what life is about.

When you dream big, you also might fail big. That doesn't have to stop you. Nar has had the biggest dream yet, and nothing is going to stop him...

Nar spent all his flint tools chopping down the biggest tree -- and then it vanished. There's reason for that, and the humans and the dogs are about to find out what it was.

The great Time Tree has been destroyed, Time has been let loose. What will Time bring to the first people and the first dogs?

Before Time was set loose, there was no Beginning, or Ending...

With Time flying by to unbalance the equations of Life, it's only a matter of Time before hunger outgrows the supply of food...

Time is passing, and generations are trying to remember all the things that have happened. But you can't assume innocence in humans, not even when you were innocent yourself...

Fez enjoys an outing as much as anyone, but this one is giving him some trouble...

When one person (or one dog) has what someone else wants, things begin to happen -- for good or for ill.

Skeem's dreams of wealth come from laziness...can he make the effort necessary to be lazy all the time?

Having taken all of Skeem's crystals, Kanive has a plan to corner the market, to become Creation's first Fort Knox.

Conclusion. With the invention of money, things have changed for the humans. What could have been convenient becomes a bone of contention. 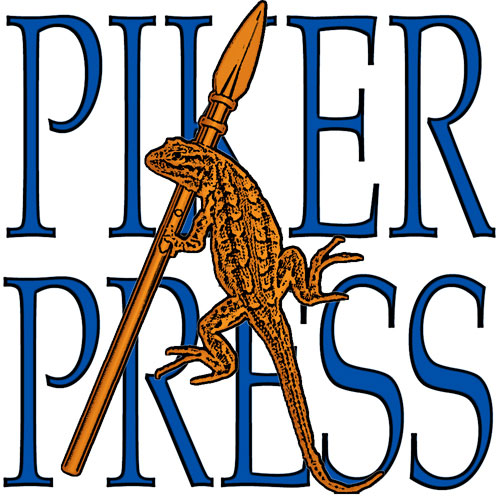 Hailing from the quiet, itchy back woods of Pennsylvania, Paula Patruzzi has this to say about herself:"I've been a paper carrier, punch-press operator, 'sales associate', and pipefitters'/welders' helper. Now I'm a writer, which is a lot more fun than the other ones."