A freelance writer currently operating out of Branson, Missouri, Steven P. Servis has a bachelor degree in creative writing, with a minor in advertising and promotion. Publishing credits include "The Taj Mahal Review." His website is Steven P. Servis

The word has been said, the idea understood. How do you feel when you've just been told that you will never live on the cherished other side of that fence? 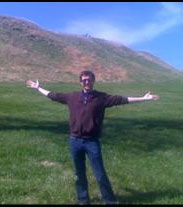 I was born in Camden, Maine, which is small town on the mid-coast of Maine. I was the 6th born child, and my brother came a year later. Our family lived in a small house on Mill St., which is at the base of Mt. Batty. Our neighborhood was active, as nearly every house on our street was tenanted by children. Many times we played sports like baseball, basketball, football, and soccer. We also played games like Flashlight Tag, Kick the Can, and other games.

When I was 11 my family moved to Missouri, where I now reside. We moved into a house on Table Rock Lake outside of Branson, Missouri.

I began attending college in 2001 at OTC. After my first semester, I took time off to get my life on track. I realized that success in college is dependent upon meeting one's basic needs, and I didn't have a steady job or a permanent place to live.

I moved to Harrison, Arkansas and lived with my oldest brother for a year. I soon found a steady job prep cooking at Olive Garden in Branson, and it was there that I learned the self-discipline I needed to become successful in college.

I returned to OTC in January of 2005, and I continued working at the Olive Garden. I graduated from OTC in December of 2006.

In January of 2007 I began attending college at Missouri State University, in Springfield. I bought a house on the north side of Branson and commuted to college.

I chose a major in Creative Writing, because I felt that it held my interest more than any other subject. Soon after, in the fall of 2007, Taj Mahal Review published my story "Death to Molly."

In April of 2007 I became married to my wife, and a few weeks later we learned that she was pregnant.

I chose a minor in Advertising and Promotion. In March of 2009, the MSU Bears baseball team chose my advertising group's campaign, stating that it was the most creative.

On June 5th of 2009 I officially graduated from MSU with a Bachelor's Degree in Creative Writing.