A leap of faith, a gift of hope, and a stretch of the imagination -- freedom and joy!

Peter is a speculative fiction writer, most notably the author of the award winning supernatural thriller, "The Grandmaster." He is also the Founder and Managing Editor of Ex Machina Press, a publishing company based in Los Angeles, which was named 2007 PUBLISHER OF THE YEAR by the DIY Book Festival in Los Angeles. (Originally appeared 2009-12-21)

In the face of injustice, one can only hope that someone, somewhere will take a stand against it ... 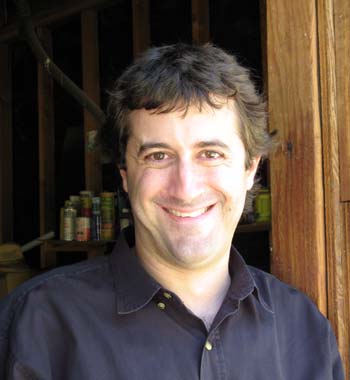 Born in Brooklyn from Italian/Greek descent, Peter is indeed a man of many professions -- including a microfilm clerk, an environmental and pharmaceutical chemist, a theatre actor, a freelance news camera operator, an NBC Page for The Tonight Show, and a camera technician for NBC/Universal Studios, until he finally discovered his niche: freelance copyeditor/proofreader, speculative fiction writer and Owner/Managing Editor of Ex Machina Press (www.exmachinapress.com), the proud parent of Silent Voices: A Creative Mosaic Of Fiction. Peter received his BS in Chemistry and his MA in English (Creative Writing/Literature) from Loyola Marymount University in Los Angeles. His early literary influences include Ray Bradbury, Isaac Asimov, Harlan Ellison, Edgar Allen Poe, H.P. Lovecraft, Stephen King and many others.

His fiction and poetry have been published internationally. His gothic horror novella, The Chameleon's Addiction, was a semi-finalist in the 2004 Glacier Press Writing Contest and is now published online by Bards and Sages Publishing, who also published his short novel, The Grandmaster, a supernatural thriller that takes place during the Holocaust. Originally his graduate master?s thesis, The Grandmaster ranked third in Bards and Sages nationwide Speculative Fiction Novel Contest and is now on sale at amazon.com and Barnes and Noble. The Grandmaster has also been awarded as a Top Ten Finalist by the Preditors and Editors Reader's Poll for Best Horror Novel of 2007, and it was also named BEST SCIENCE FICTION OVEL OF 2008 by the Hollywood and New England Book Festivals. He has just completed his first short story collection, In His House, which will be featured by The New Short Fiction Series on October 2010 in Beverly Hills . One story from that collection, "Crossing the Styx," was awarded Best Unpublished Short Story at the 2007 DIY Book Festival in Los Angeles, where Ex Machina Press was also named PUBLISHER OF THE YEAR. His short story, "Oranna's Song," was awarded Honorable Mention (ranked SECOND in the nation) in the Romance Category by the Fourth Annual Writer's Digest Popular Fiction Awards. He also often serves as a reviewer for L.A. Splash (www.lasplash.com). Peter is now writing his first full-length Wagner Mythos Novel. "Lessons in Aviation" is one of Peter's Wagner Mythos tales. His website is www.peterabalaskas.com.