Anna Sykora writes for the joy from Hanover, Germany, where she resides with her patient husband and three enormous Norwegian Forest Cats. Editors seem to prefer her humor, horror and animal tales.

Walt's weekend of liberty should be coming to an end, but he can't bear to go back, not yet ...

Walt has escaped from jail, and is well on his way to getting Hulk back to his owner, but someone still plans to track him down ...

Family can be trying even during the best of times, but this one is pulled in so many directions that it's very hard for them all to pull together ...

It's the booming 80s, and if you want to ride the boom to the good life, you have to make a few sacrifices ... it will all be worth it, won't it?

No matter what weapons are being used, isn't it true that Love conquers all?

Crazies are bound to destroy the world as we know it -- the apocalypse could be right around the corner ...

Tomatoes for the summer, potatoes for the winter ... the neighbors may laugh now, but the financial crisis is peeking over the horizon, and Mary Lou sees a lot less of it behind the hedge of her plants.

The economy is iffy, and people have forgotten that there is only so much money to go around. Maybe it is high time we all looked at our gardens differently...

The trick is to know when enough is enough -- and then have the sense to stop...

Now was the time when a grandmother's ghost should have whispered that air circulation is important, along with the paper bags ... but who listens to grandmothers any more, whether it's about green tomatoes -- or money?

Look out for yourself -- this future is closer than you think!

A lot of work, a great deal of study, and what is the result? A huge sense of accomplishment, and a bumper crop of joy!

The invasion! Only one being could stop the annihilation of the world...

The only way to avoid the curse of Death is to welcome and embrace the gift it brings...

Ah, to wake upon that shining shore again...

Ah, Vienna, city of ancient beauties! But what may feast the eye may still endanger the soul... 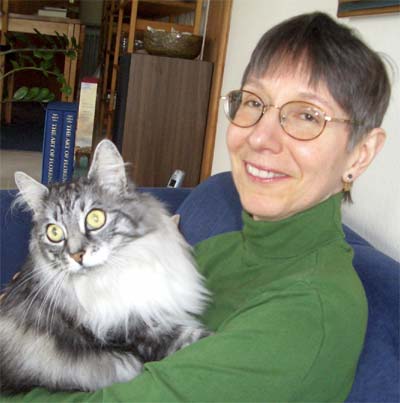 Anna Sykora has been an attorney in New York and teacher of English in Germany (she married a German). She has not quite given up the crazy dream of earning some income from her fiction... Her unpublished novels include a historical study of the witch persecutions in l5th century Germany, and a humorous family saga (*The Ballad of Calamity Mom),* excerpts of which have appeared in *Rosebud* and *The Barbaric Yawp*. To date she has placed 62 stories and ll9 poems in the small press or on the web. Mottos: "Eat your rejections like pretzels," and "Better a life than a living."