The death of an unknown jazz legend passes as unnoticed as the man's tremendous talent, mourned only by a musician and the muse of modern sound.

A stranger in a foreign land looks for a gift to leave his hosts. Is the strange statue of the serpent a stolen antiquity, or is it a message from forgotten gods that the time has come again to steal back the secret of everlasting life and forestall the final fires that will destroy mankind?

Making friends is never so insiduous as when you're looking to travel light.

Just one trip and he'll be able to retire planetside forever, never to set foot in a ship or be forced to endure his crewmates again. But, as one young traveler learns, spacer is a state of mind. First appeared 2005-01-23

A beautiful girl catches his eye. She seems familiar, and when she calls out to him like he knows her, he asks where it is that they met before. Why does that seem to cause her so much pain?

Mankind has been struggling with the issue of bottom-line versus human resources since the building of the pyramids. Finding the right balance isn't something we're going to achieve any time soon.

In a war of loneliness, the battle itself is the only prize and the victor never really wins.

Out there it was easy to believe in a God that lived to pull the strings, giving tiny events great significance. A rundown motel and casino reveals itself to be a shrine to the God of Numbers.

He had the territorial aggression and fearlessness of a wolf, but he was lucky to top the scales at ten pounds. Ultimately, it would prove the little dog's undoing.

Saying goodbye to an old friend. He always did have to do everything big.

A bum sipping from a brown bagged bottle, a stray dog sniffing about, squirrels scampering through a park - would you recognize the end of the world if you saw it unfolding before your eyes? Maybe. Maybe not.

A freak? Far from it! Little Buddy was the most considerate roommate ever.

Maybe he was going to die for that rock, but he wanted to make sure his grandchildren had a good life. All he had to do was get there first, and hope for some sweet savior to bring him some air ...

A slightly alcohol-soaked narrative outlines a tale of mercantile sin and meteoroligcal salvation as a graying barfly describes the night he piloted the Davemobile through the Storm of the Century. (Originally appeared 2005-03-27)

When you look into someone's eyes and recognize that their loneliness matches your own, all you want is to take their hand and walk with them ...

In the City of Spires, there is a holiday that everyone celebrates, a holy-day of the human heart. Even the darkest winter must give way before it ...

Funny thing about writing -- once you start doing it, it changes how you see things ... and do things ...

It was how we knew we were home, and where we went to say goodbye to the ones who would never return, the ones whose eyes only looked to the stars. The rest of the world might forget us, but not this place.

Strange forces are at play, but no tiny, chirping, harbinger of the apocalypse is going to get away with destroying the world tonight.(Originally appeared 06-06-2005)

The shadows of Old Town were her shadows, and the breeze drifting through the twisted lanes was her breath, and it spoke with her voice, saying, "Kill him ninety-nine ways ... " (Originally appeared 08-21-2006)

The City of One Hundred Spires is far richer than what you see in the travel brochures. However, if you want to sample the real flavor of Prague, you have to know the right places to look ...

There's something out there, and you know it's there, but you can't put into words what it is, that certain ... see? words fail again. But you have to keep looking, and if you're going to search with any expectation of finding, you're going to have to give that search your whole heart ...

One thing marks all the spaces between the stars: silence. Be there joy, or despair, elation or loss, the vacuum of space marks each emotion, each triumph, each death in utter quietude. This is the life the spacers know, and strangely, crave. Most of the time the stars welcome those silent travelers, but there comes a different kind of explorer, and there is only one place left for that kind...

The time has come for the prophesy to be fulfilled. From the mysterious realms of a twisted universe, a figure appears ...Originally appeared 2006-12-18.

The Unknown is out there, waiting, mostly empty, but holding mysteries that may be no more than just memories. Agnes Stephenson wonders if there is more out there than memories, and if she'll ever be more than a rear guard ...

While the stars whisper overhead, and the creatures of the earth vibrate with their songs, while the rasp of daily voices fills the very air you breathe, where can you go to listen to what's in your heart?

You find a line out there, that edge past which lies what you were seeking, that cliff that changes you forever ...

Just one trip and he'll be able to retire planetside forever, never to set foot in a ship or be forced to endure his crewmates again. But, as one young traveler learns, spacer is a state of mind. (Originally appeared 2005-01-23)

An alien invader shows up on the doorstep in time for a cup of tea. The battle to comprehend one another is arduous, the prize as fleeting as any other moment.

"...It's the hardship as much as anything else that makes the cowboy who he is..."

When you know that there's some Mulligan out there just waiting to take you down, you have to keep your eye on the ball and your hand ready for the quick draw. And dammit, you KNOW those suckers are nearby, watching, ready to take you out ... they're just not always everything you think. But some of them -- are!

In the unstructured universe of the internet, fact, opinion, and myth can be hard to differentiate. The author relates the fascinating process of researching the short story, The Serpent, and the concept and symbolism behind the Gilgamesh mythos.

This summer my brother and I learned we had won the Federico Fellini award for the script we had co-written, Pirates of the White Sand. Just writing the thing together had been a great experience, but now we were going to make a movie. A movie. I jumped a plane to be there for pre-production.

A street in Prague on a rainy night

An angel crowned with snow watches over a grave in Prague.

A macaque, in a regal pose.

"You can have your old churches and monuments, take me to the place the locals go to spend an evening in convivial conversation." Jerry visits Zapata, a tapas bar in Cadiz, Spain.

A Kansas sunset on the road.

A view of the white city Vejer, Spain.

A look at american heroes, the road in pop culture, and the disappearance of the small towns that were nourished by the road, wrapped up with cowboys and rock stars as part of the new american pantheon.

An ode to one poet's inspiration.

Castle Ruin on a crag, Slovakia.

Winter path through a cemetery in Prague.

A view of Dunluce Castle, minus its kitchen, which fell off.

The calm waters of Killybegs Harbor in Ireland.

Simply a tram barn, but an attempt to get a good picture turns strange ...

Jerry Seeger shows us flowers on a cliff in Northern Ireland.

Active vent in the central crater of Mt. Etna, in Sicily.

The "Little Cafe Near Home" in Prague, Czech Republic. 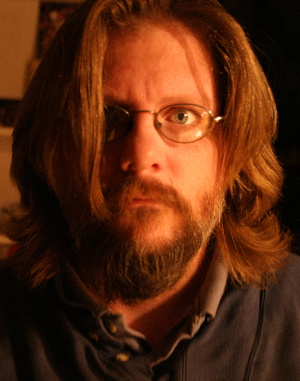 Jerry is a geek. There's just no getting around the fact, any more than you can say the sky's not blue (of course, if you get high enough...). In high school Mrs. Shankland, his favorite English teacher, was terribly disappointed when he chose a career in physics. Career in physics. Right. Jerry ran out of steam after just four years of college and was condemned to a career in computers. He did OK there, writing educational software for fifteen years or so, helping people learn macroeconomics and the concepts of "up" and "down". (Can you say LeapFrog?)

Secretly, the whole time, Jerry wanted to write stories. Every once in a while he'd even write one, to the rave reviews of people who would never tell him the truth. Then one fateful November he made the flop - he decided that writing would be the career and software would be the hobby. He laid himself off from his company and while half-heartedly looking for a new computer job really set to writing. Eventually he gave up pretending to be looking for gainful employment and hit the road, the real road, the living road, freeloading off friends and distant relations all across North America. He set his eventual sights on Prague. It's cheap there, and cool, to boot.

"What makes you think you'll be able to stop when you get there?" asked one of his hosts along the way. That remains unanswered.

Just because he started writing seriously didn't stop Jerry from being a geek. It's in the blood, baby. He created his own word processor, Jer's Novel Writer, to overcome his rather scattered brain so he could keep on writing a whole dang novel without having to worry so much about remembering stuff, or looking stuff up. The software has since gotten some pretty great reviews from other equally scattered writers. You can check it out at http://jerssoftwarehut.com. Sorry, kids, Mac only.

Jerry now spends his days writing software to help him learn Czech (rather than actually learning Czech) and writing. There is nothing, absolutely nothing, better than telling people "I have to work" and taking the 'ol laptop down to a bar to do some writing. It is work, real work, smack-your-head-against-the-table work, but man, what a great life. He has recently completed a novel and is trying to wrestle another into final form.

Jerry also dabbles in photography, experimenting with pretentious pictures of himself and of the places he's been and the people he's met. You can see more pictures at http://www.singleclick.com/gallery/vikingjs. He likes his music loud, the way Bach and Vicious intended it to be, and enjoys beer a little more than he should. He can make forty-two different balloon animals, but they all look like wiener dogs.