It's curtains for the theater, and the mining industry is rocky, but are you aware of some of the other signs of a worsening economy?

You never know where evil may sprout ... or what the answer to a prayer will be.

O, cruel Fate, to bring such consummate joy through the pages of a precious tome, full of the rich and love-strewn scent of perfectly aged papers, only to snatch happiness away by that same device ...

It was a simple job, but it did need the help of a professional, in spite of the cost ...

It was to be a night of love -- or not. It was to be an advance of a career -- or its demise. Let's face it -- Warren was between a bear trap and a cliff over a river of crocodiles ...

How ironic that the very sport that brought them together would be the one to drive them apart ... no pun intended ...

"He worshipped the very air she trod upon, but did she really give a FCC?"

She had legs from there to here, and if she ever had to brush something off her arm, it would be gold coins the size of a personal pizza ... but the important thing was that she had a dead ocelot ...

She was a redhead, with entrancing freckles and a fine way with words ... but making speeches is sometimes the least of political skills ...

Everyone's betting on Warren to go undercover. The only question is under wear?

For some, Love is a blessing, for others a curse -- it just has to be the right kind of curse.

Ah, the sweetness of the one and only voice murmuring the words that the heart so longs to hear...!

Laughter, they say, is the best medicine. Will it bring success in business as well? Warren Borman knows the truth ...

If you've listened to Warren Borman tell a story before, you know what to expect ... well, at least you think you do ...

The lads are getting impatient, but Warren's story about misuse of medication is only getting to the good part ...

Madeleine has spurned Warren, but will she find someone her intellectual equal?

Jonathan D. Scott is the owner of a small advertising and graphic design firm in the Southeast. He is married with two daughters and is a very ordinary person, or at least appears so to the casual observer. (Originally appeared 2009-05-18)

Really, you'd think H.W. Longfellow would have known better than to write something like that ...

The shadowy recesses of the curtains, the soft sound of steps upon the wooden dais, the splendor of the lights...theater! Nothing like it! 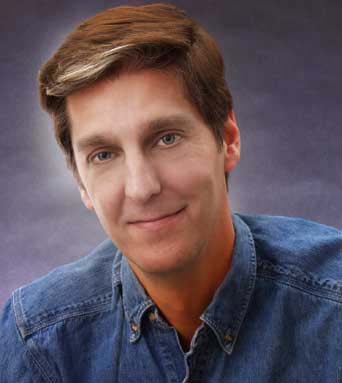 Jonathan D. Scott uses his middle initial not for the sake of pretention, but to distinguish himself from the hundreds of other Jonathan Scotts, many of whom have more talent than he does.

He is the owner of a small advertising and graphic design firm and lives a very ordinary life with two cats, two cars, two daughters, and one wife.

Many people would never suspect him of having a secret life as a writer, which is probably why his two published novels haven't yet made it to the NYT Bestseller list. (They are available from amazon and middletonbooks. com.)

His kindergarden teacher wrote that "he thinks he's in class not to learn but the entertain the others." Unfortunately, that's still the case.

Many of his short stories can be found in literary print and online journals.