Talking to Myself: A Brief Auto-Interview

Q: So, you're a cartoonist. How did that happen?
A: Some sort of genetic defect, obviously.

Q: Is that a real job?
A: Of course not. I actually make my living as a writer. I work for Jim Davis, creator of the GARFIELD comic strip, as a writer/editor. I work on books, greeting cards, T-shirts, and other stuff -- providing editorial.

Q: So where does the cartooning come in? Do you draw Garfield?
A: No, I'm strictly a wordsmith at Paws, the Garfield studio. I do a lot of freelance writing and cartooning -- children's books, greeting cards, gag cartoons and the EEK! strip.

Q: Any awards you want to brag about?
A: Why yes, thanks for asking. In 2007 I won the Golden Duck Award for Best Science- Fiction Picture Book for my graphic novel NIGHT OF THE HOMEWORK ZOMBIES. The illustrator, Steve Harpster, also received the award. This year's winner is Berke Breathed (of Bloom County and Opus fame) for MARS NEEDS MOMS. Oh, and I won a reading award in the second grade. Little plastic trophy cup. Very prestigious.

Q: What other cartooning and writing have you done, and does your boss know you're moonlighting?
A: I've done greeting cards for years, working with almost every card company except Hallmark. I've written over a dozen graphic novels for Stone Arch Books since 2005, and in the last couple of years, I've cracked a few major magazine markets. Got a cartoon in PLAYBOY, a couple in NICKELODEON magazine, and just made my first sale to READER'S DIGEST last month. I also contribute fairly regularly to MAD magazine, which is really a dream come true. It's not quite the MAD I grew up with -- most of the old-timers don't work for the magazine anymore -- but, still, it's MAD.

Q: You really like talking about yourself, don't you?
A: Hey, you asked!

Q: So what's the deal with EEK?
A: After years of submitting material sporadically to the syndicates, I actually got a deal from King Features back in 2004. The strip was TRIPLE TAKE, which I produced with Todd Clark. Todd wrote most of the gags, and I drew the strip. TRIPLE TAKE lasted about two years; then King pulled the plug.

Q: What's this got to do with EEK? Can't you focus?
A: I'm getting to that. After TT ended, I wanted to try another strip, so I worked up one called HIS & HERS about a young married couple.

Q: You're getting further off topic...
A: Quit interrupting. I pitched H&H to all the syndicates, but didn't get a bite. Then I tried doing a strip with a collaborator. We pitched GO TEAM BOB, about a boy and his imaginary friend, but that also failed to spark any interest. I decided to put H&H and GTB on the GoComics site.

Q: Getting bored now...
A: I'm almost done. While doing the two strips, I had the idea for EEK! I've loved monsters and horror since I was a kid (bought FAMOUS MONSTERS OF FILMLAND magazine, horror comics, had all the monster models, masks, toys, etc.). I started working on EEK! and the gags just flowed. It was very effortless, which means that the material comes from a very pure place. The humor might not connect with everyone, but at least I amuse myself.

I pitched EEK! again, but found myself the victim of bad timing. LIO had just come out and was doing very well. Editors felt EEK!, with its dark themes and macabre humor, was too similar. Also, another syndicate was developing a strip called SCARY GARY. I got a lot of positive feedback about EEK!, but no takers. So I decided to put it on GoComics. I dropped the other two strips so I could focus on doing EEK! five days a week.

Q: Good. So what's the deal with the book?
A: It's 96 pages of frightening fun with a full-color cover and collects the first several months of the strip. The book is guaranteed to tickle your funny bone and inflame your spleen.

Q: Nice commercial.
A: I just received my copy from Lulu. It's a great looking book.

Q: You forgot the link, Mr. Self-Promotion.
A: Right. It's here.

Q: Anything else?
A: No, I'm good. Just want to thank the nice folks at The Piker Press for asking me to be here. EEK! Comics From the Dork Side, by Scott Nickel, is now available in print! 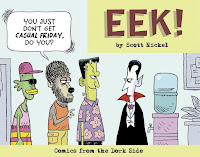 Talking to Myself: A Brief Auto-Interview