The Descent of Man: Book Review 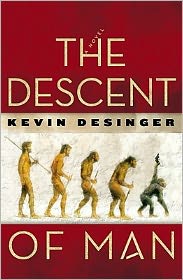 The Descent of Man, by Kevin Desinger.

When you take primitive action to solve a modern problem, a part of you reverts. A part of your intellect and most of your emotional structure loses thousands of years of social development. You grow thick and stupid, and you scuttle backward on all fours into the narrowest crevice that will accommodate you, and wait in the dark as the moon cycles through. - from The Descent of Man, page 245 -

Jim Sandusky is a quiet, introspective man who is prone to pulling inside himself and mulling over issues rather than talking to his wife, Marla, about them. Through their long marriage, Jim has often made decisions without consulting Marla ... and one night when he wakes to find their car being broken into, Jim once again acts without Marla's input. He pulls on his shoes and goes outside to confront the thieves, then makes an impulsive decision to steal their truck.

But this is a male quandary: If we just stand there and watch we feel like idiots; but (depending of course on what we do) we can also feel like idiots for having acted. There might be a narrow window of involvement that can keep us from feeling like idiots, but in the moment we can't know whether our course of action will make us appear heroes or fools. - from The Descent of Man, page 7 -

This one rash decision has far-reaching implications when the thieves turn out to be two brothers with a long history of violent behavior. Jim must not only deal with his impulsive behavior, he must navigate the dark side of his marriage and somehow figure out how to put his life back together.

The Descent of Man is a mix between literary fiction and psychological thriller. Kevin Desinger narrates his novel from the limited point of view of Jim, taking the reader deep within Jim's consciousness as the character descends into the shadowy world of criminals and prostitutes, and the darker corners of his mind. Jim devolves from a meek, responsible wine steward into a man capable of almost anything to protect the world he values.

The attempted theft had pulled me off course, gotten me behaving in unfamiliar ways. I was caught between my world and the world of the Hood brothers, and I wondered what it would be like to be them, to steal cars on a regular basis. - from The Descent of Man, page 133 -

This is a very male novel in that the protagonist's actions are something that most women can not comprehend. In fact, Marla, Jim's wife, finds herself feeling more and more removed from her husband as the novel moves forward. What Desinger does well is show how a man's baser instincts can overwhelm morality and conscience when he feels himself threatened and angry.

If there is a weakness in the book, it is that I found myself a bit disbelieving of Jim's actions ... and the response of law enforcement. Desinger wants the reader to imagine that a thwarted theft can turn a good man into someone capable of very bad behavior, and that law enforcement might be willing to look the other way -- something I did not completely buy into.

That said, Desinger redeems the novel with well-paced tension and some twists I did not see coming. As Jim descends into his city's nightlife and reality becomes blurred, the reader begins to wonder if the character will ever find his way back to the quiet life he has built with his wife.

Readers who enjoy psychological thrillers and literary fiction will find The Descent of Man a worthwhile read.