Everything Beautiful Began After: Book Review 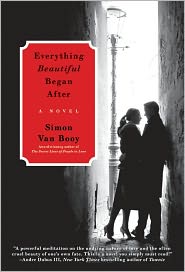 Everything Beautiful Began After, by Simon Van Booy.

On the way back home through the dusk, she's going to ask her father for the story of how he met her mother. All she knows is that someone fell, and that everything beautiful began after. - from Everything Beautiful Began After, Prologue -

Athens has long been a place where lonely people go. A city doomed to forever impersonate itself, a city wrapped by cruel bands of road, where the thunder of traffic is a sound so constant it's like silence. Those who live within the city itself live within a cloud of smoke and dust -- for like the wild dogs who riddle the back streets with hanging mouths, the fumes linger, dispersed only for a moment by a breath of wind or the aromatic burst from a pot when the lid is raised. - from Everything Beautiful Began After, page 11 -

Rebecca is an artist from Paris who has come to the Mediterranean to paint -- but she is also searching for herself among the Greek ruins. George, a southerner from the United States who grew up in New England boarding schools, is also searching for identity. Brilliant in language, but lost in alcohol, he is looking for acceptance and the love that has so far eluded him. Henry is an archeologist who carries the guilt of his brother's death -- more than the bones of ancient people, it is forgiveness he really seeks. These three characters meet by chance, but are drawn to each other -- three damaged people who are looking for deeper meaning in their lives.

Simon Van Booy's novel unfolds slowly, weaving back and forth in time, giving glimpses of the characters' lives and uncovering their secrets and desires. Readers familiar with Van Booy's short stories will recognize the themes of identity, love, grief and the power of human connection as familiar. Van Booy's prose has a poetic rhythm to it. He uses simple, yet powerful, sentence structure to create beautiful imagery, effortlessly drawing the reader into the world of the characters.

One strong theme in the novel is that of fate vs. choice. Rebecca is not a believer in fate. Abandoned by her mother, she sees the future as a series of personal choices -- yet, she of all the characters, is the most impacted by chance.

Rebecca told herself that she did not believe in fate. She believed that she alone was responsible for everything that happened to her. If there was such a thing as fate, she thought, her mother would be blameless. It would have been her fate to abandon her daughters.

But it was not fate.

It was her decision. - from Everything Beautiful Began After, page 140 -

Van Booy also examines childhood experiences and how they impact adult lives. Each of the characters has had childhood losses: Rebecca's loss of mother, George's loss of parental love, and Henry's loss of his brother. Those losses effect how each character is able to form connections to others and open their hearts to love. Van Booy weaves his narrative to allow the reader access to the characters' deepest fears by showing their pasts. Some of the most moving passages in this novel revolve around the parent-child relationship.

A novel like Everything Beautiful Began After always risks becoming maudlin or depressing. But Van Booy's talent carries the book from despair to hope.

After every chapter of devastation, there is rebuilding.

It happens without thought.

It happens even when there is no guarantee it won't happen again.

Humans may come and go -- but the thread of hope is like a rope we pull ourselves up with.

- from Everything Beautiful Began After, page 367 -

Van Booy manages to surprise his reader with subtle twists and turns of plot. He gives his characters room to grow. He enthralls with simplicity and careful, eloquent description of the small things in life.

And he is enchanted by the beauty of small things: hot coffee, wind through an open window, the tapping of rain, a passing bicycle, the desolation of snow on a winter's day. - from Everything Beautiful Began After, page 401 -

I wondered whether Van Booy had the ability to pull off a novel-length work. But I should not have ever doubted his talent. I loved this novel as I have loved Van Booy's short story collections. This is a gorgeous meditation on love and human connection, a poetic piece of work which completely captured me. Readers who are drawn to literary fiction and who seek out novels that transport them, will not want to miss Everything Beautiful Began After.