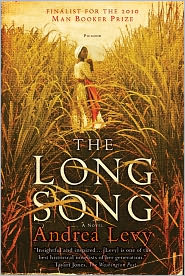 The Long Song, by Andrea Levy.

Kitty turned to face her master.

'Come along, Caroline. Hurry. We need to get out of the sun.'

'Yes, if she'll amuse you. She would be taken soon enough anyway. It will encourage her to have another. They are dreadful mothers, these negroes.'

'She'll be my companion here,' Caroline said. 'I could train her for the house, or to be my lady's maid.'

July is born in the early part of the nineteenth century on a Jamaican sugar plantation. Her mother is a black slave, her father the white overseer who is her mother's rapist. One hot day when July is still just a young child, she is noticed by Caroline Mortimer, the sister of the plantation's owner who has arrived from England. On a whim, Caroline decides to take July to be her companion, stealing her from July's mother without a second thought and renaming her Marguerite. The Long Song is July's story, narrated retrospectively by an adult July many years later. It is not an easy story, spanning decades and taking the reader through the tumultuous years of the Baptist War and the controversial end to slavery in Jamaica. But, it is July's voice which drives the narrative. Funny, cynical, highly observant and intelligent, July weighs in on racism, violence, and the struggle for freedom at a time when blacks were viewed as property to rich, white landowners.

Only with a white man, can there be guarantee that the colour of your pickney will be raised. For a mulatto who breeds with a white man will bring forth a quadroon; and the quadroon that enjoys white relations will give to this world a mustee; the mustee will beget a mustiphino; and the mustiphino ... oh, the mustiphino's child with a white man for a papa will find each day greets them no longer with a frown, but welcomes them with a smile, as they at last stride within this world as a cherished white person. - from The Long Song, page 203 -

The Long Song is a brilliant novel narrated by an unforgettable character. July is perhaps one of the most memorable female voices I have read in a long, long time. Bittersweet, funny, often devastating ... this is a novel which drew me in immediately and held me in its grip to the final page. Andrea Levy writes with an honesty and insight into the human condition that takes one's breath away.

The Long Song was shortlisted for the 2010 Booker Prize, longlisted for the 2010 Orange Prize for Fiction, a finalist for the 2011 Commonwealth Writers Prize, and named as a 2010 New York Times Most Notable book. It is, in my opinion, worthy of all these accolades. Beautiful prose, enduring characters, and the evocation of place that vibrates off the page, all combine to create a remarkable novel of historical significance.

Readers who love literary fiction and historical fiction will want to put The Long Song on their must read list.