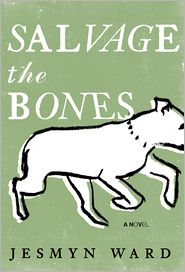 Salvage the Bones, by Jesmyn Ward.

I will tie the glass and stone with string, hang the shards above my bed, so that they will flash in the dark and tell the story of Katrina, the mother that swept into the Gulf and slaughtered. Her chariot was a storm so great and black the Greeks would say it was harnessed to dragons. She was the murderous mother who cut us to the bone but left us alive, left us naked and bewildered as wrinkled newborn babies, as blind puppies, as sun-starved newly hatched baby snakes. She left us a dark Gulf and salt-burned land. She left us to learn to crawl. She left us to salvage. Katrina is the mother we will remember until the next mother with large, merciless hands, committed to blood, comes. - from Salvage the Bones -

Esch is fourteen and pregnant, living with her brothers and her father on a hardscrabble piece of land they call "The Pit" in the small, coastal town of Bois Sauvage, Mississippi. Left motherless when their mother died giving birth to Junior, who is now seven years old, the siblings are fiercely loyal to each other. Skeetah, devoted to his fighting dog, China, is determined to stand up to their father -- a man who has been mostly absent and drunk, and can become volatile and abusive.

He reaches to grab Skeetah's arm, to pull him to standing and then shove him, probably. This is what he does when he wants to manhandle, humiliate; he pulls one of us toward him, shakes, and then shoves us hard backward so that we fall in the dirt. So that we sprawl like toddlers learning to walk: dirt on our faces and our hands, faces wet with crying or mucus, ashamed. - from Salvage the Bones -

Randall, the eldest boy, longs to find his way out of The Pit through his skill as a basketball player. Junior, too young to fully understand the family dynamics, clings to Randall. Junior's innocence, his childish body and desperate longing for attention, are heartbreaking.

Sometimes I wonder if Junior remembers anything, or if his head is like a colander, and the memories of who bottle-fed him, who licked his tears, who mothered him, squeeze through the metal like water to run down the drain, and only leave the present day, his sand holes, his shirtless bird chest, Randall yelling at him: his present washed clean of memory like vegetables washed clean of the dirt they grow in. - from Salvage the Bones -

Salvage the Bones is narrated in the observant voice of Esch in the ten days leading up to Hurricane Katrina, culminating in the storm and its aftermath. The novel opens with the birth of China's puppies -- creatures which represent money and prestige to Skeetah. As with all the characters in the book, the puppies are born into a world which challenges their very survival ... and China, muscular and bred to fight, is far from a competent mother.

What China is doing is fighting, like she was born to do. Fight our shoes, fight other dogs, fight these puppies that are reaching for the outside, blind and wet. - from Salvage the Bones -

Jesmyn Ward's writing is breathtaking, raw and completely honest. She portrays a family who is somehow surviving against all odds -- ragtag, poor, and with only each other to depend upon. China takes center stage in a novel about determination and fighting for one's life. She is sleek, muscular and focused. China's heart belongs only to Skeetah, a young boy who has mastered a brutish beast with a penchant for killing. China's presence is both a representation of loyalty and love, and a sinister threat -- the siblings constantly admonish Junior to stay away from her, she is not allowed in the house, and Randall (a fit and toned athlete) is frightened of her. Against the backdrop of China is the myth of Medea. Esch is reading Medea's story, and the themes of betrayal, suffering, and injured love are strong in the novel. In the Greek play, Medea seeks vengeance against the father of her children when he betrays her love. Medea's jealousy is violent and murderous -- and her story weaves in and out of Salvage the Bones, giving the novel a dark and foreboding feel.

Salvage the Bones is like nothing I have ever read before. I found it hard to tear myself away from these characters whose lives were so fragile and yet were defined by an inner strength which was both admirable and grim. Ward's ability to draw the reader into a world which is sad, brutal and nearly hopeless, speaks volumes about her talent. Because, despite the bleakness, the novel allows for a glimmer of something which could be called hope. There is something remarkable about Esch, Skeetah, Randall and Junior -- their fierce protection of each other, the love that surfaces through the dirt and despair of their lives, and the determination to find the light in the darkness.

Salvage the Bones is stunning, beautiful, tragic, heartbreaking, and wholly absorbing. Readers should be warned -- Ward includes scenes of dog fights, and it is difficult to read -- but, it is not gratuitous. China's story is as much a part of the novel as the stories of Esch, Randall, Skeetah and Junior ... in fact, China's story provides the structure from which all of the other stories spool out.

Salvage the Bones is an original, beautifully wrought piece of literary fiction.