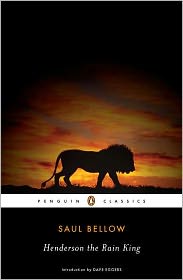 "Now I have already mentioned that there was a disturbance in my heart, a voice that spoke there and said, I want, I want, I want! It happened every afternoon, and when I tried to suppress it got even stronger. It said only one thing, I want, I want! And I would ask, 'What do you want?' But this was all it would ever tell me."

Saul Bellow creates an unforgettable man in Henderson The Rain King. Middle aged and wealthy, Eugene Henderson has become jaded by his life. His pig farm isn't giving him any satisfaction, and he doesn't have to work, so he picks and chooses what he wants to do with his time. He's an avid reader and chances upon the perfect passage, which he promptly loses in his library.

"But privately when things got very bad I often looked into books to see whether I could find some helpful words and one day I read, 'The forgiveness of sins is perpetual and righteousness is not required.' This impressed me so deeply that I went around saying it to myself. But then I forgot which book it was."

Soon he decides to make his way to Africa. Ill prepared, he figures he'll just find his way with his natural abilities. So he tags along on the honeymoon of a friend and soon finds himself basically alone in the Dark Continent with little more than his wits and the help of the native guide, Romilayu, whom he has bribed to follow him wherever it the world takes him.

The man has little impulse control, and being driven by his own personal mantra of 'I want, I want, I want' he makes foolish choices that have far reaching results. His childlike wonder at things he comes across during his travels are further complicated by his determination to make something better for the people he meets. He ignores taboos and outright pleas from the men and women with whom he interacts while trying to find his place in the world. In the first village he comes upon, that of the Arnewi tribe, there is a water source that is "unclean" due to frogs. The people and animals are dying. Seizing the initiative unasked, he figures he has the solution. The result is cataclysmic for the people, and he flees to find who else he can help wanting to rectify his mistake.

His automatic assumption that he understands the world he's journeying through creates his own trap, as he interferes in the village of the Wariri's ritual of rain. Thus he becomes "Sungo" -- the Rain King -- and the confidant of the tribe's leader, King Dahfu. Here he finds himself in deep discussions and dancing with the more dangerous elements of Africa. Lions are the reigning element of the royal lineage and Henderson becomes embroiled in the mysticism and problems of King Dahfu, who has not complied with the royal degree regarding the lion he caught. The elders of the village are not happy with Henderson, and mystical things befall him as he tries to get himself free from the quagmire of his own making.

Often he talks with God and openly admits his failures as well as what he wants. Near the end he puts it out for the reader to digest and ponder. His mistakes are obvious to the reader, and yet there is something innocent and beguiling about Henderson's soul.

"And I prayed and prayed, 'Oh, you ... Something,' I said, 'you Something because of whom there is not Nothing. Help me do Thy will. Take off my stupid sins. Untrammel me. Heavenly Father, open up my dumb heart and for Christ's sake preserve me from unreal things. Oh Thou who tookest me from pigs, let me not be killed over lions. And forgive my crimes and nonsense and let me return to Lily and the kids.'"

He keeps his heart and soul intact even while fleeing his own mistakes, taking back with him a bit of Africa. This was the author Saul Bellow's favorite novel, from what I later read. He released a statement telling readers not to look for symbolism in everything he wrote right before the book was published. Yes, I found things in within the work that rang a bell for me.

"We are funny creatures. We don't see the stars as they are so why do we love them? They are not small gold objects but endless fire."