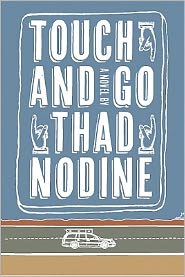 Touch and Go, by Thad Nodine.

I thought of reeds bending but not breaking in the wind, and the strength of roots holding down the reeds -- and the force of wind itself, blowing. I was tired of being the reed. - from Touch and Go -

Kevin has been blind since a tragic childhood accident. He is still struggling with staying clean and sober after a drug addiction which left him homeless and hopeless. Now living with Isa (a woman he met in a drug treatment center) and her sometimes brutal and abusive husband, Patrick, Kevin clings to the love he has found with Isa and Patrick's two foster children -- Devon a black teenager on the verge of violence, and Ray, a twelve year old who still mourns the loss of his mother. When Patrick and Isa come up with the idea to load a garish coffin onto the top of their car and drive from California to Florida with their children in order to visit Isa's dying father, Kevin decides to go along with them. The trip, ill-conceived and tense, becomes a nightmare of lies, greed, betrayal, and finally, Hurricane Katrina.

Touch and Go, Thad Nodine's debut novel, is narrated in the perceptive voice of Kevin -- a man who has lost his vision and his way and is struggling to find love and acceptance. Kevin is a character who finds himself involved in a love triangle with two very damaged people. Isa is bipolar, unpredictable, and battling her own demons while Patrick views the world through a narcissist's eyes and uses his intellect and manipulations to get what he wants regardless of who it will injure.

Patrick was always threatening without filling in the blanks, so he couldn't be held accountable. He called himself a Christian Libertarian; I don't know if he invented the term or got it from somewhere, but it gave him a belief system (after the recovery home, anyway) that was open and rigid at the same time. As a Libertarian, he believed in maximum freedom -- under God, which was the Christian side of the equation. Take it or leave it; it's up to you whether you want to be saved, but don't try to butt in on Patrick's freedoms. - From Touch and Go -

The two children in the novel are compelling. Both Ray and Devon have lost their childhood innocence to adults who have failed in their basic responsibility to care for them. As part of Patrick and Isa's family, they have come to count on two things: Patrick's anger, and Kevin's compassion. As the novel unspools and this patched together family finds themselves on the Gulf Coast in the path of Hurricane Katrina, the reader begins to fear the worst.

Touch and Go explores the definition of family by going deeply inside the relationships of the characters.

I don't know how any of us find our place in this world except in relation to others. - from Touch and Go -

The novel also looks at prejudice, multiculturalism in the United States, domestic violence, drug addiction, redemption, survival, and the idea of self-determination. Nodine's characters are multifaceted and carefully developed -- none are all good or all bad, yet all have complicated and tragic pasts, as well as secrets, which influence their decisions and actions.

I raced through this book in just about two days. Nodine provides excellent pacing for a novel which is clearly in the literary genre. If there is a fault, it is that he tends to wrap things up a little too neatly in the end. Despite that minor complaint, I found myself thoroughly enjoying Kevin's unique perception of the world. Some of the novel's best moments were the glimpses into Kevin's relationship with the two children -- a heartwarming exploration of nontraditional parenting.

Readers who enjoy literary fiction will want to add Thad Nodine's work to their must read list.

Thad Nodine grew up in Florida and now lives in Santa Cruz. His fiction and nonfiction have appeared in many magazines. Touch and Go, which won the Dana Award for the Novel, is his first novel. Read more about Nodine and his work by visiting the author's website.

FTC Disclosure: Many thanks to the publisher who sent me this novel for review on my blog.