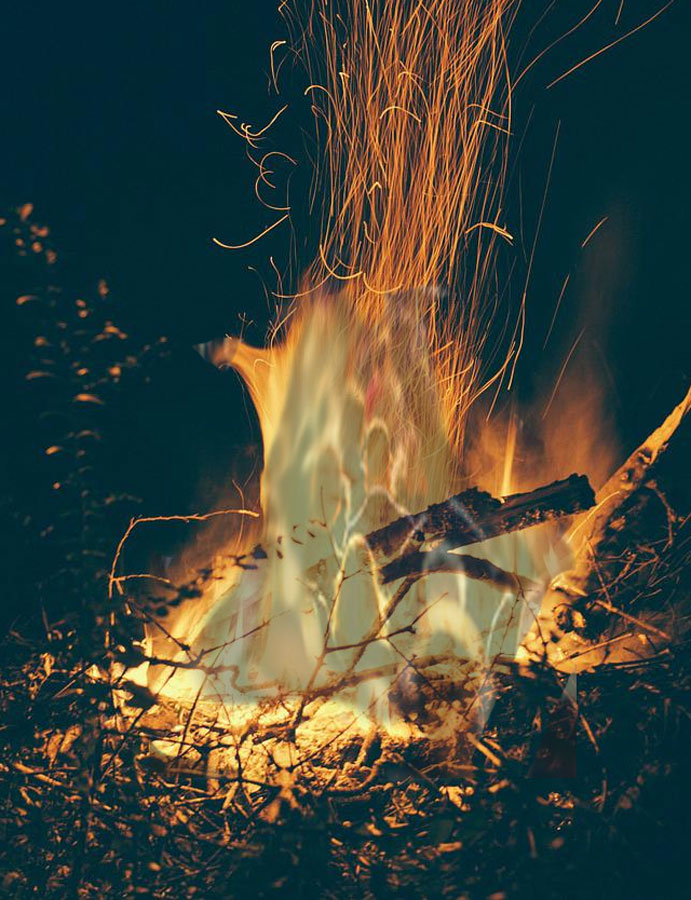 It was late at night, and Tog sat alone in front of a small fire in the wilderness. He was wearing animal skins and occasionally held his hands over the fire for warmth. As the blaze began to die down, he reached over to his right and picked up a few sticks, which he tossed onto the fire. After a time, Tog looked up to the sky. Between the clouds he could see the stars. Tog stared at the tiny lights in the blackness. He let out a sigh and lowered his head to look at the ground.

A gentle breeze began to blow. At first, Tog was oblivious to the wind. It wasn't until he heard a voice in the moving air call his name that he took notice.

Tog lifted up his head and looked around but saw only trees and darkness. "Who's there?"

The voice in the wind whispered, "Tog, you seem restless."

"You are seeking answers, aren't you?"

"You want to know why you are so different."

"You are the beginning of something new, something that will take over a million years to come to fruition."

"You are not meant to understand. Just know that you are important."

"Clear your mind and look into the glow of the fire. Don't rush it. It will come to you slowly -- just know that the images will appear."

Tog looked at the glow and waited. He waited for a long time and was about to give up, but then images began to appear before him. He saw people who looked strange to him. The sheer variety of skin colors was amazing. There were so many, and they lived everywhere. The homes that they lived in, the clothes that they wore, and the things that they made were both amazing and wonderful.

The voice in the wind asked, "Now do you see?"

"Who are those people?"

"Those are your descendants."

"But I don't even have any children."

"Why do they look so different?"

"Over long periods of time, small changes will occur that will eventually lead to people who are very different from the people that you have always known. You are the first to change in those small ways. Someday, they will call themselves Homo sapiens. They will look back at your people and call you Homo erectus."

"Those are strange names," Tog said with a laugh.

"The things that the people will build seemed magical."

"To you and your people they may seem beyond belief, but your children will create and master great knowledge."

"I could see some of them living long, happy lives. But then there were those who killed and killed and killed. They don't seem to learn how to master peace. They will be every bit as violent as my people, if not more."

"It is true that your descendants will master the arts of war as well."

"Is there nothing that can be done to stop that?"

"There is nothing that you can do to stop what future generations will do. If they ever stop killing, they will have to find that within themselves."

"Is there no way to keep the good and avoid the bad?"

Tog fell silent for a long time. He continued to watch the fire burn.

Finally, the voice in the wind spoke up and said, "Tog, you seem to be upset with all of this."

"There is nothing that you can do to change what others will do."

"What if you jumped?"

"Yes, what if I end this before it ever starts?"

"That would change everything. Both the good and the bad visions that you've seen will never be. What you do is up for you to decide. You should know that once you take that leap, it cannot be undone."

Tog became silent again. He began to rock back and forth, contemplating what he would do. Then a determined expression came to his face. With both hands, he scooped up some dirt and threw it onto the fire to extinguish it. Then he got up and walked into the wilderness. A short time later, he came to the top of a high cliff. He looked down to the rocks below but did not jump. His determined expression had morphed into one of confusion.

The voice in the wind asked, "Why do you hesitate? Are you afraid to die?"

"Yes, I am afraid of my own death, but that's not why I've started to have second thoughts."

"I can't stop thinking about the happy people."

"Their lives matter. I have no right to take their lives, their very futures away from them. As much as I want to stop the killers, I can't bring myself to harm the innocent ones."

"You have stumbled upon a dilemma that all of your descendants will encounter in one form or another: deciding what to do when there is no perfect choice available. There are many things that you can change, but there are also many things beyond your control. The world that you live in is filled with numerous shades of grey."

Tog sighed. The voice asked, "So, what will you do?"

Tog fell to his knees and hollered out in anguish and frustration. After a time, he stood up and turned his back to the cliff.

The voice asked, "You have decided?"

Tog shrugged and replied, "I guess I have. Maybe the decision had already been made for me. Perhaps the very nature of who I am dictates the choices that I make. I don't know. I just know that I can't jump, therefore the future is what it will be. Right now, I'm tired and hungry." He looked into the night sky and added, "Thank you for the visions and advice."

"You are welcome. Go in peace."

With that, Tog began his long walk home.

The Yellowstone Mechanism
Path to Peace