Will he really “face down” China? 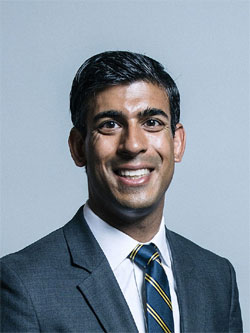 The UK has a new prime minister…

Today’s world news is evidently dominated by a variety of interesting and illuminating stories, expectations, theories, debates and analyses about Mr. Rishi Sunak, a former chancellor of the exchequer who is now the new leader of the UK Conservative Party and the new UK Prime Minister.

Imagine, as leader of the largest party in the Commons, he gets invited to Buckingham Palace by the King in a ceremony called “kissing hands.” Yes, a tradition dubbed "kissing hands" as if it is some interesting political marriage of sorts. The King looks him in the eye and questions him, “Mr. Sunak, do you really and honestly believe you can form a new government?” That is a rhetorical question, your Majesty, I overhear Mr Sunak respond inwardly. You will recall that he was a key, resolute and passionate part of that leadership race, and of course the answer is an affirmative one! After all, he is making history.

He has a string of firsts and spurs under his belt. Aged 42, Mr. Sunak becomes the country's youngest leader in modern times and its third in less than two months. Not only that. Furthermore, he is one of the most affluent politicians in Westminster. Evidently, it has not been an obvious, predictable and easy political journey. He replaces Liz Truss, who only lasted 44 days before she resigned and departed the scene. Undeniably, Mr. Sunak basks in glory and the limelight as he becomes first prime minister and the first British Asian person to hold the office and the first prime minister appointed by the new King Charles III.

Where does he stand as he assumes power? In what economic state is his country? The world? What about the ordinary citizens’ expectations and opinions? Reforms and regeneration? His views and policies? Generally, people should not expect major miracles and policy shifts and reforms lest disappointments and ire haunt them faster than they know.

He surely gives a sense of hope and pride to the people of colour and of diverse creeds across the entire world. Like Obama at the White House, he assumes the reigns at 10 Downing Street when the UK is dogged by economic hurdles and turmoil in particular. Similarly, when Obama became the first first US black president, the people of colour took pride in seeing themselves in the person of colour who occupied the highest office of the USA. Like Obama, a number of people of colour, especially of Indian stock, probably pin their different hopes and expectations on him. Like Obama, he becomes prime minister when the world is facing some serious economic decline in general.

Suffice to say that he takes over during one of the most tempestuous eras in British political history. He needs to reestablish stability to a country that is quivering and careering from years of political and economic turmoil. He seeks to lead a party that has splintered along ideological lines. He is tasked with navigating a severely divided country through an economic downturn bent on leaving millions of people in the cold and poorer.

He is to the Indian British what Obama was to the black Americans. Is this a mere coincidence? Is history repeating itself? Countless questions spring up. He could be lounging in exaltation, elation and indulging now, but what lies ahead is bigger, tougher and weightier than the taste of the pudding. It is the eating of the pudding that is crucial. For it is the eating that will ultimately define his tenure and legacy and the country’s and the citizens' memories of his administration. It has not been an easy road for the millionaire. He has no illusions about the mammoth task that lies ahead. Hence he told his lawmakers in parliament on Monday that they faced an "existential crisis" and must "unite or die." He told the country that it faced a "profound economic challenge."

For example, specifically, what does his administration mean for science? James Wilsdon, a science-policy scholar at the University of Sheffield, UK, says, “in terms of ideology, Sunak is enthusiastic about science, innovation and technology, and there is evidence of that through his decisions as chancellor.” However, Kieron Flanagan, a science and technology policy student at the University of Manchester, UK, begs to differ.

“The big increases in science spending that he signed off when chancellor were already planned under previous prime Theresa May. In fact, he scaled them back and delayed them because of the pandemic.”

What does his administration mean for the UK-Chinese international research partnerships? China sends huge numbers of students to UK universities, where they pay a premium for education and training. In a succession of tweets on 25 July when the leadership race was heating up, Sunak stated that if he were to be victorious in his leadership bid, he would introduce measures to “face down China.” That doesn't sound like something that will or could endear him to the Chinese.

Those measures entail reviewing all UK-Chinese research partnerships that have military applications or the potential to help China technologically, and providing more support to universities to counter alleged industrial espionage. That plan of action could see the closure of thirty of China’s Confucius Institutes; these are culture and language centres attached to the UK universities that are funded by the Chinese government. Would China take kindly to such measures? Does the world not hunger for a greater measure of human care, caution, coordination rather than competition and conflicts? When will the world leaders ditch unilateralism for multilateralism? When will they walk their talk?

How will the Indian citizens view his administration, historically and retrospectively? In terms of trade and business? In history, we probably learnt about the Industrialisation Era and how Britain invested money in farming and industry in India. Prior to the colonial period, Britain bought goods like textiles and rice from Indian producers and paid them with silver.

However, in 1765, the trading pendulum had a curious and cunning shift. This was shortly after the India Company took control of the subcontinent and established and enjoyed a monopoly over Indian trade. In fact, the East India Company started collecting taxes in India and then used a chunk of those revenues (about a third) to fund the purchase of Indian goods for British use.

Put simply, instead of paying for Indian goods out of their own pocket, the British traders literally acquired them for free, since they "bought" from peasants and weavers using funds they had just been taken from them! In 1858, they added a special dimension to the tax-and-buy system: Indian companies were allowed to export their goods directly to other countries. The monopoly had fluttered. Yet Britain made it sure that the payments of those goods eventually ended up in London. In that predetermined process, it is estimated that India lost about a whopping $45 trillion.

In conclusion, as a peace-loving African and a son of Matabeleland, I would like to appeal to King Charles III and Prime Minister Rishi Sunak not to sweep the Gukurahundi issue under the carpet, but to attach an indispensable, incontestable and deserving importance to it for the sake of justice, world peace, Ubuntu and the healing and helping of the anguished, orphaned, persecuted, citizenless and hapless victims and survivors who do not even have birth certificates and the right to hold memorials for their departed ones.

Will he really “face down” China?

No Climate Justice Without Financial Compensation
When Suicide Slithered in Like a Snake
It's The Bitter Pill, Not the Pessimist
A Flow of Flawless Flaws
The Wild Whirlwind Will Wane
A Breeze No Longer Sound and Sane
A Really Repulsive Remark
Nature Seeks Good Health and Happiness
A Reality Show with a Difference
Plagued by an Energy Pandemic
People's Syncretic And Secretive Practices
Weird Personalities and Their Policies and Practices
Special Every Day
Street Names
Dudula
Is There Something Un-African
Don't Race
They Are Not Alone
Our Fiercest Foes on the Planet
A Thirsty Throat
A Rootless Tree Needs To Be Upheld
The Spirit in Action
Her Munching Mumbling Machine
The Mysteries Behind Its Ebbs and Flows
Misfits Massacring Memorials
That Day's General Knowledge Lesson
Not Everyone Will Show the Same Signs
A Perfect Personification of Life
Of Hidden and Hungry Hustles
For the Love of Verses and Vibes