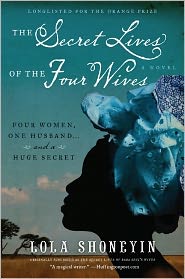 The Secret Lives of Baba Segi's Wives, by Lola Shoneyin.

"Wipe your eyes," she said, passing me a rag. "It has been a month since your parents died. This is not your home and it will never be. A girl cannot inherit her father's house because it is everyone's prayer that she will marry and make her husband's home her own. This house and everything in it now belongs to your uncle. That is the way things are." - from The Secret Lives of Baba Segi's Wives, page 135 -

Bolanle is Baba Segi's fourth wife in a polygamous marriage. She is educated and young, and is a threat to the other wives in more ways than one. When she fails to conceive a child, Baba Segi is bereft and begins to seek answers which may uncover the biggest secret his wives have kept from him yet. Told in multiple and alternating viewpoints, The Secret Lives of Baba Segi's Wives explores the polygamist society of Nigeria by gradually revealing the secrets of the women who people the novel.

Iya Segi is the first wife -- large and outspoken, she is the unofficial power beneath Baba Segi's roof. Her plan to humiliate Bolanle and drive her from their home gets lukewarm support from Iya Femi, the third wife who has vengeance on her mind and who would rather see a quicker solution to the problem.

When a plan does not go right, you plot again. One day you will get it right. One day you will be able to damage the person who hurts you so completely that they will never be able to recover. I have told Iya Segi this on several occasions. I keep telling her that we need to find a permanent solution but she does not have wisdom. - from The Secret Lives of Baba Segi's Wives, page 74 -

Iya Tope is the second wife, a woman whose compassion is silenced by fear. Forced into an arranged marriage to Baba Segi, Iya Tope has learned to be humble and silent in the face of wrong doing.

As the story unfolds, the lives of each of these women intersect and come together to reveal the larger family of Baba Segi. Other characters are introduced, including Taju, the driver who also harbors a secret, and the many children who live in the house. Although Lola Shoneyin breaks up each person's narrative by chapter, I found many of the characters' voices to be interchangeable, and so sometimes I found myself struggling to keep all their stories straight in my mind.

Thematically, the novel probes the rights of women in a polygamist society and in Africa in general. Baba Segi is a self-important, chauvinistic man who sees Bolanle's inability to conceive solely her fault. His view of sex is all about his own pleasure and he refers to it in crass terms. In general, sex is not portrayed as all that desirable -- for the most part, it is represented as a wifely duty for the women with the point being to produce children. Sex for pleasure is largely punished and a source of guilt in the novel.

Shoneyin shows the inequality of women in her book, and all but Bolanle are portrayed as conniving, manipulative and vengeful. It made me wonder how accurate the novel is with regard to women in African society. Ultimately, Shoneyin provides for some redemption and forgiveness in her book about family secrets, betrayal, and disloyalty.

I found this to be an easy book to read. The individual stories are laced with myth, parables and folk lore. I enjoyed the gradual revealing of each character's secret -- a bit like peeling the layers off of an onion. Shoneyin managed to surprise me a bit with Baba Segi's character who is so stereotypical at the outset, but managed to grow into a person who had depth and empathy by the end of the book.

The plot of this book is original, although the characters felt a little bit undeveloped to me. Shoneyin captures the flavor of a paternalistic society well.

The Secret Lives of Baba Segi's Wives was nominated for the 2011 Orange Prize for Fiction and will appeal to readers who enjoy African literature.