The Novice: A Story of True Love: Book Review 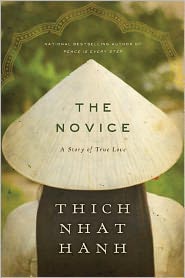 The Novice: A Story of True Love, by Thich Nhat Hanh.

Those of you who are old enough will recognize Inspector Dim's song from Monty Python's Flying Circus. This song came to mind as I was reading The Novice by Thich Nhat Hanh. Of course the words would have been changed slightly.


I won't continue with the lyrics as I can't figure a substitute for "rub-a-dub-dub" that would be respectful. This only goes to highlight the fact that I am not a Buddhist, and I do not wish to in any way imply that I know what I am talking about when I talk about Buddhist customs or beliefs. Every time I encounter Buddhist thought presented by a reputable source, however, I am very much impressed. There is to me a familiar "feel" to Buddhism, like the feeling of walking into a Catholic Church. I know that it is entirely subjective, but that feeling is closely associated with Catholic understanding of the presence of Christ in the Eucharist present in the tabernacle on the altar. I've had that same subjective feeling in Yosemite National Park, amid the natural splendor that both John Muir and the Miwok Indians found so holy, and significantly, in a Buddhist Temple in Nagoya, Japan, amid the smell of incense, and with a robed monk on his knees in meditation before a statue of the Buddha.

(Of course I've also had the best Rum Collins I ever had in my life in the lodge at Yosemite. I try not to attach any significance to this beyond the ordinary, but the truth of the matter is that when I order a mixed drink, which is not often, it's a Rum Collins, and it never measures up to those I had that night in Yosemite. They were mystically good.)

I am not a Buddhist, and my reaction to Buddhism is necessarily heavily filtered through the lens of Catholicism. But I did not need to be Catholic or Buddhist to be intrigued by the premise of the story of Hanh's book The Novice: A Story of True Love. A young Vietnamese woman, Kinh Tam, is from little on attracted to the teachings of Buddha. The traditional society she lives in, however, does not afford women the opportunity to pursue her interests. She obediently allows herself to be married off to a man of her parents' choosing. The marriage ends rather bizarrely, and Kinh takes the opportunity to leave her village to pursue her true desire, the monastic life. Since the monasteries accepted only male novices, Kinh adopts the guise of a young man.

Her holiness, her pleasant nature and her knowledge of Buddhist scriptures soon catches the attention of the abbot, her fellow monks, and the townspeople who frequent the monastery. In particular, the novice Kinh Tam catches the eye of a local girl, Thi Mau, who is used to having her way. Mau lusts after the handsome young novice who is so wise, and when Kinh makes it clear that he wishes to have nothing to do with her, she despairs, and drowns her sorrows in another man's arms. Finding herself pregnant, she claims the Kinh is the father, and a scandal ensues, rocking the town and the monastery.

Kinh now faces the dilemma of proving Mau's claims false by revealing her own deception, thus shamefully ending her monastic life, or continuing her deception and weathering the storm of the scandal for which she is falsely accused.

Thich Nhat Hanh is a Buddhist Zen Master. In The Novice, he is retelling a tale that is familiar to the Vietnamese, and if the notes at the end of the book are accurate, the story is based on a "real, live bodhisattva." I need to be careful here, because I am not a Buddhist and do not want to misrepresent their teachings, but my understanding is that a bodhisattva is an enlightened being, a person who embodies the teachings of Buddha. I'm sure there are better, certainly more accurate descriptions of bodhisattva, but I think that you get the idea. You certainly get the idea if you're Catholic, as this sounds very much like the idea behind saints. The Novice is a classic "lives of the saints" story, long on reverence for custom and legend, a little short on literary flair. The Novice is a long fable, told in the straightforward, unembellished didactic style of a Grimm's Fairy Tale.

The historical accuracy of the tale is not the point. You can accept that the Vietnamese believe that Kinh Tam existed or not, belief is not necessary for the tale to accomplish its mission -- to inform and instruct. Kinh Tam's life challenges you to see that there are important principles in how life works, and that there are ways to discover these principles. Throughout the tale, there are presented Buddhist resources -- The Sutra of Forty-Two Chapters, The Collection on the Six Paramitas -- and terms like the six perfections -- generosity, mindfulness trainings, inclusiveness, diligence, meditation and insight. Some things you can understand from the context, other things you are just going to have to look up. But it is clear from the story that Kinh Tam (and the author Thich Nhat Hanh) wants you to seriously consider that the teachings of Buddha are an effective means of dealing with the sufferings of life. Kinh Tam is asked how she is able to maintain her composure in the midst of the turmoil about her.

"It is because I have learned and am applying the practice of inclusiveness that I am able to avoid falling into suffering and reproach. Practicing magnanimity brings us away from the shore of sorrows and over to the shore of freedom and happiness. Paramita, as my elder brothers already know, means 'crossing over to the other shore.' According to The Collection on the Six Paramitas, the Buddha taught:


Although never specifically mentioned, The Novice is a story that illustrates quite clearly the Four Nobel Truths of Buddha:

Refreshingly, there is no resorting to syncretism on the part of the author -- Buddhism is presented without apology, confidently but not arrogantly. I don't know of many modern works that would include a statement like the following: "Kinh Tam was fully engaged in observing the precepts and fine manners of a novice monk, which included not befriending and conversing with women alone in secluded places." There are a number of Catholic priests who would do well to remember this, not to mention professional athletes.

At 105 pages (plus another thirty-seven pages of commentary), The Novice is an easy and quick read. It could be seen as parochial and irrelevant, I suppose. Yet, Kinh Tam is honored for her "capacity to listen to the suffering of people, to understand, and to find those people in pain and help them." That's a quality that I think deserves consideration.