Rules for Resurrection in Science Fiction 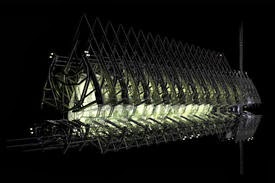 Science fiction is about exploring possibilities, plumbing the depths of our hopes and fears. It is not surprising therefore that overcoming death is a recurrent theme in science fiction, from Frank Herbert's Dune series, to Alastair Reynolds' novel House of Suns, to the remade Battlestar Galactica TV series with its 'Resurrection Ship."

But it has to be carefully done, otherwise it will appear as fantasy rather than science fiction. Here are some rules I use, as a number of my characters do get 'resurrected:'

These are not scientific rules of course (except the first one); rather they are related to the credibility of the fiction itself. E.g. here's a little 'reader psychology: most of us would like to live longer, even if not forever, but we know we can't, so a book that portrays it as easy will create enmity in at least some readers, and a lack of serious engagement in others. Also, from a fiction point of view, if it is too easy, it removes all the conflict and the result becomes banal -- in my view this is what happened with the TV series HEROES -- most characters who were killed off simply came back somehow, so there was no risk anymore, and hence no more engagement by the viewer (this one, at any rate).

There must therefore be a scientifically plausible (even if fantastical) mechanism for making a dead person alive again. DNA is not enough, since DNA has no storage of human memory, and no record of personality traits -- DNA is what we are, not who we are. Even cloning does not reproduce the personality -- consider identical twins who can be quite different in character. Some kind of deep brain-scan is a reasonable proposition (not that we can do anything like that yet, of course), along with DNA sampling.

Even then, the idea of a person slipping from one body 'sleeve' to another, with his or her personality and memories completely intact, seems too good to be true. It is just a little too 'cute' as a writer's device, that some readers won't swallow it (though a good writer will probably get away with it). Frank Herbert was a master, and resurrected Duncan Idaho via an alien cloning process, but to activate the original's personality it was necessary to put the clone through an agonizing crisis -- most clones didn't survive the process.

Therefore, when I do 'resurrection' in my books (having made sure there is an adequate mechanism), I generally have the process lead to changes in personality, sometimes subtle, at other times more extreme. For extra life, or for a second chance, there has to be a price.

Why do it at all? Well, if we could resurrect Da Vinci, Mozart or Einstein, we would wouldn't we? Equally there would be quite a few characters who would be banned from resurrection, forever.

But in my books, which take place during first an invasion and then a galactic war, the reasons are strategic, bringing back key characters -- both good and otherwise -- because individual leaders can make a significant difference, as our history shows.

The other thing I do to make it more believable, is make it clear that not everyone can be brought back. I've had various readers implore me to bring back certain characters, but I tell them it's not possible, because the conditions were not right, and the moment has passed. They are gone. They cannot come back. This is the way life is. Fiction is truth wrapped in a lie.

I also don't use this device often; five times in four books, and even then two of them don't survive very long. That seems somehow right, doesn't it?

One interesting aspect with resurrection is that in a strategic conflict such as a war, it becomes tactically advantageous to remove the enemy's ability to resurrect -- a key plot aspect in the final season of Battlestar Galactica, and also a key element in Herbert's Dune series, to destroy the 'Axolotl tanks' that kept creating the warrior Duncan Idaho. 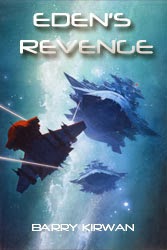 Here's an example of 'resurrection prevention' from Eden's Revenge; Kat is trying to kill the 'almost-cooked' recent-memory-loaded clone of Louise, one of the nastier characters of the series.

Inside the square chamber the smell of astringent disinfectant washed over her, blue light seeping out from an open sarcophagus raised on a plinth. Kat spied a pulse pistol on a rack near the door. It made sense -- if Louise was killed, the clone would auto-activate and might well need a weapon. Kat stuck the sheathed knife in the back of her waistband and picked up the gun, checking its charge. She almost tiptoed over to the large bath-like basin, filled with what she guessed was Q'Roth blue amniotic fluid. Underneath the surface was a human outline, but she would have to reach in to pull out the clone's head in order to kill it. What made me think this would be easy? At least there were no ripples, not even bubbles on the liquid's surface. Reluctantly, she rolled up her left sleeve, took a breath and slid her fingers, hand, and then her entire arm into the body-temperature fluid. It was deeper than she'd hoped.

When the liquid was almost up to her shoulder, she touched soft flesh. Her fingers skirted around, finding a nose and closed lips. Kat needed to reach deeper to get her hand around the back of the clone's neck to pull her out, but she'd have to put the pistol down and hold onto the edge with her right hand, and she was on her toes already. Kat cursed, but there was nothing else for it, so she laid the pistol where she could grab it in a hurry, gripped the side of the bath, took a breath and leant a little deeper, the side of her chin dipping into the syrupy fluid, praying that the clone was inert.

Her left hand slid behind the clone's neck, and using her right hand as anchor, she began to tug the clone to the surface. As Kat hauled herself back, so that her feet reached the floor again, she grunted with the effort to raise the clone's head completely out, against the sucking effect of the gelatinous liquid. Her right hand groped for the pistol.

Just as the clone's face broke surface, its eyes opened, followed by its lips. Kat grabbed the gun but the clone's arm whipped out, catching Kat's at mid forearm, killing her grip. The pistol rattled to the floor.

"Hello Kat," the clone gurgled, blue liquid oozing out amongst the words. "How long can you hold your breath?"

The clone's hands snapped around Kat's neck and dragged her down into the sarcophagus. Kat's entire body tumbled in. Her eyes and nostrils burned, and she thrashed about, trying to break the clone's grip. She suddenly remembered the knife, and reached back with her right hand. At the same time, the clone's arms straightened, its hands squeezing tight, strangling Kat. The pressure on her carotid arteries triggered dark patches in her already-blurred vision, almost making her drop the knife. But the straight-arm stranglehold gave her the room to manoeuvre. With a bubbling grunt, Kat swung the knife staight up into the underside of the clone's jaw, driving its long blade up through the clone's throat and into its lower brain.

Kat breached the surface, gasping and coughing, then clambered out, slopping out of the ooze, and sat shaking on the floor, her back against the sarcophagus, in a large blue puddle. She tossed the knife, sending it skittering across the floor. "Longer than you think, bitch," she said, then spat out some more of the fluid.

Needless to say, Louise is pretty pissed off when she finds out what Kat has done... 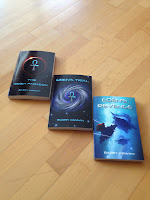