How it is, how it was, and who gives a honk, anyway?

You Dope, What Were You Thinking? 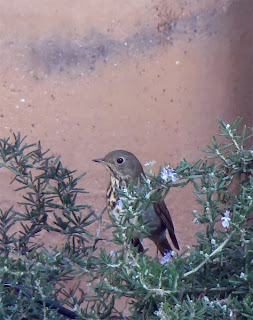 Each winter a thrush -- or maybe several -- makes his hangout our back patio, sipping from or bathing in the birdbath, rummaging around the plants on the back bank. In this picture, I caught the thrush rooting through the rosemary plants for whatever it is thrushes eat.

But this evening, as the sun was going down, there was a whonk! on the sliding glass door to the patio, and Alex exclaimed, "Oh, what have you done?"

We all talk to the birds. Who cares if they don't understand? We don't, they don't. Maybe they do understand. But Bernie and I rushed to the back door to see what bird had knocked himself simple (or killed himself) flying into the glass. Looking at the greyish-brown back, and catching a glimpse of the chest stripes, we knew it was our thrush. "Why where you flying so close to the house?" I asked. Usually he is no closer than the bird bath.

The poor thrush was lying on his belly on the cement outside the door, his head bent at a horridly unnatural angle. It didn't look good for the bird at that point.

But we've watched other glass-bonkers rally in the past, and while the thrush was still breathing, we kept vigil, with 18-month-old Joan shouting encouragement at the bird and thumping on the glass door.

Abruptly, the thrush rotated his head back to a normal angle. Good, good, bird's still breathing. A few minutes later, with a stagger, the thrush stood up. One foot was kind of bent under itself, but it was progress.

Then it was a waiting game, Bernie and I poised to open the door and drive off any of the myriad of loose cats that wander the neighborhood. The sun went down. Alex turned on the patio light. The thrush still stood there in the same position, breathing, unresponsive to our movements on the inside of the door.

It was nearly dark when the thrush turned his head and looked at us. He watched us all for a few minutes, then hopped forward, away from the house, his foot righting itself. We cheered as he hopped towards the back bank, and we followed with a flashlight, to make sure he wasn't going to try to go to sleep on the ground.

He hopped onto the retaining wall, and again took some minutes to re-boot his birdy programming. At last he fluttered up into the nandina bush, and we all expressed relief in cheers and sighs: a cat couldn't get to him there.

I have no idea why birds fly into glass, especially ones that usually don't come close to the house. But when one does, just leave it alone until it either gets up and flies away, or dies. Please don't try to "help" the bird by picking it up. The impact throws them into shock, and handling by a giant can push the shocked system right into the only escape possible -- death by terror.

We're all hoping to see the thrush back at the bird bath tomorrow around ten, when he usually drops by for a drink.