The Search for Gluten-Free Beer in the Czech Republic: Featured Blog

I Must Be Off

The Search for Gluten-free Beer in the Czech Republic 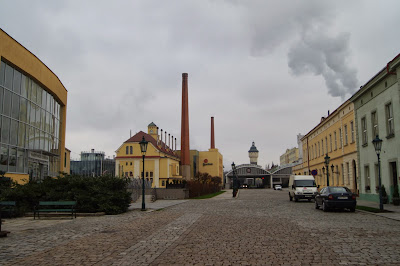 I read on the Internet somewhere that the Czech Republic was one of the leaders in developing gluten-free beer, so naturally I believed this. Off I went with visions of gluten-free tastings, gluten-free tours, gluten-free lagers and pilsners. And all we found was smokers.

If you are a chain-smoker, you really will love the Czech Republic. On our first evening in Pilsen (Plzeň), we decided to eat at the brewery, which was directly across the street from our hotel. (Finally, Sebastian the Wishing Well Attendant chose a hotel close to the things we wanted to see.) The restaurant at the Pilsner Urquell brewery is a large and loud beer hall. And it smells like an ashtray.

When we told the server -- who was trying to seat us next to a mother blowing smoke into her toddler's face -- that we'd rather not sit next to the evil mother blowing smoke into her child's face, the server simply smiled and pointed to the table again as if this table were choices A-Z all rolled up into one neat little carcinogenic ball. We left.

Leaving will do you no good, though. No matter where you go in the Czech Republic (except maybe Starbucks), you will be sitting next to a smoker. Again, if you like this and want this, you'll be happy here.

Before we left, we did ask the bartender if he had gluten-free beer.

"Gluten-free beer? Do you have it?"

"Huh? Wait minute. I get colleague. He English much plus betterski."

While the bartender was getting colleague, I noticed that they did have cider on tap: a consolation since I knew what colleague was going to tell me.

"No. We have no glutinous-free beer."

"But you have cider," I said and smiled.

"Not beer," he confirmed.

"Couldn't be truer," I said. Then we left, because I wasn't going to drink my cider in this smoke-filled room.

For the Americans reading this light gluten-free anecdote, cider (the alcoholic kind) isn't called hard cider by anyone except Americans. Everywhere else it's called, well, cider. This must be because no one else sits around the fire drinking hot cider at Christmas. If you order cider in a pub in London, you can be sure you won't get a hot drink appropriate for children with a stick of cinnamon in it.

Our quest for the elusive gluten-free industry in the Czech Republic continued the next day as we drove to Budweis (České Budějovice), home to the famous Budweis Budvar brewery where they've been brewing beer with the same recipe for 700 years. That's quite a while to go without any improvements. This beer must not be broken. Of course it's great beer. I had enough of it before I was diagnosed with Celiac Disease.

"Do you make gluten-free beer?" I asked the woman at the museum.

"Gluten-free beer. Do you make it?"

"Yes, thank you." I turned to Sebastian the Wishing Well Attendant and shook my head. The Internet had obviously lied to us.

We ate in the smoke-filled restaurant at the Budweis brewery. I ordered red wine and potatoes and watched Sebastian the Wishing Well Attendant scoffing a mountain of food drowning in a gluten-filled sauce and washing it down with a dark beer. This sucked. My disappointment was palpable, but I wasn't ready to give up. I remembered reading about a beer called Celia and had even read a couple of (not very positive) reviews.

A few impressions of Budweis, Czech Republic at night to keep you in suspense just a few seconds more: 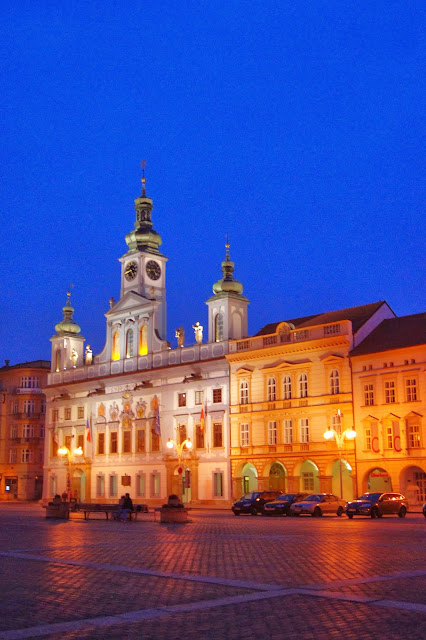 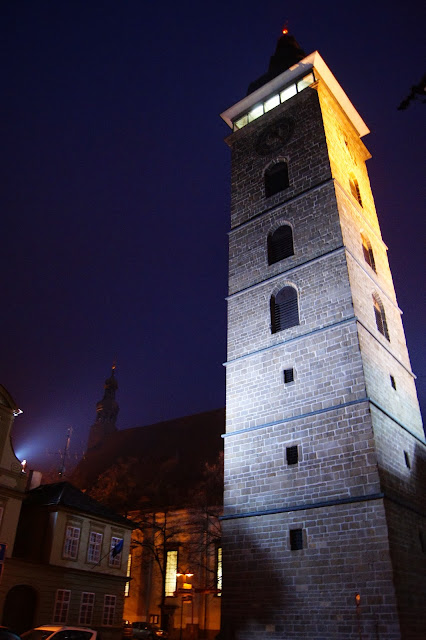 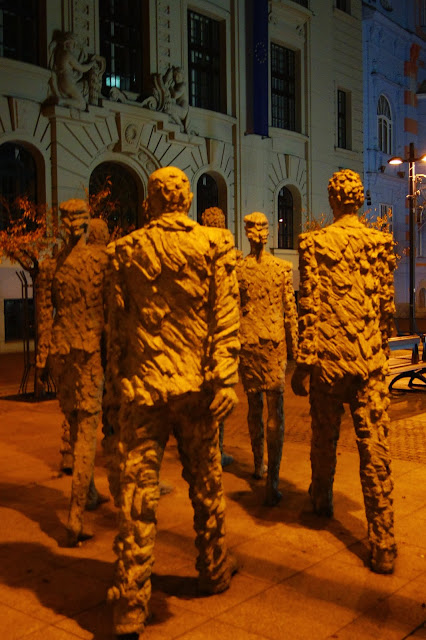 On the way home from the brewery we stopped at Kaufland, a German supermarket chain, to see what they had in the way of gluten-free products. I won't keep you in suspense. They had Celia. Eighteen bottles. At first, Sebastian the Wishing Well Attendant insisted on putting all 18 bottles into our shopping cart, but then I wisely suggested trying a bottle of the stuff before we committed to the whole lot. So with one bottle of beer in our cart, we made our way to the check-out lanes.

Even at supermarket temperature, the beer was fine. Acceptable. A little bitter, but I like that in a beer, or at least I think I remember liking that in a beer. We bought all they had. Now, the only odd thing about this purchase is that each bottle has a deposit on it, so we have to return to the Czech Republic to get it back. We're doing this on Friday with six bottles. The euro will come in handy, I just know it. 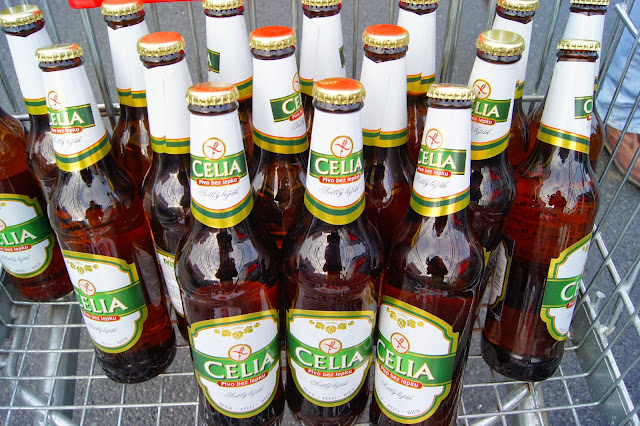 My search is not done. I'm determined to find a brewery in the Czech Republic that makes gluten-free beer and serves it in their smoke-filled restaurant. I've even started doing some research. Maybe you've had more luck? Maybe, knowing how lazy and research-averse I am, you'd like to help me do my research? Sweet people?

I must be off,

Please enjoy more of Christopher Allen at I Must Be Off.

The Search for Gluten-Free Beer in the Czech Republic: Featured Blog

I Must Be Off! Featured Blog
Our Stepford Wife