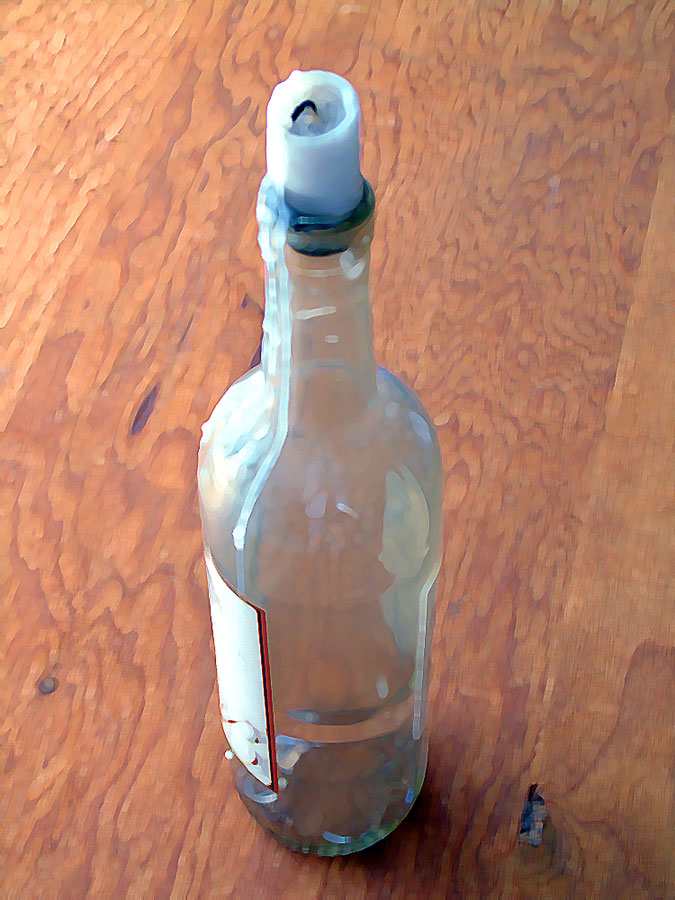 Seeing the old bar, a relic of a younger man’s life, suddenly produced a bunch of rapid memories flashing from one to the next, loose associations passing through consciousness too rapidly at first for individual contemplation. I wonder why that is; of course in my seventieth year there are more years with their associated memories but I have long seen that bar standing there near the basement wall. Perhaps the reaction was simply a function of an ageing brain, some circuit for whatever reason activated to rapidly loop through memories; a need for filing and sorting by a mind that seeks to create a summary in some kind of order.

In the summer of 1966 I first encountered the bar, a dull brown homemade affair perhaps five feet in length with a front made of cheap wooden paneling, a long dowel attached near the bottom as a bar rail, a rough cut shelf in the back with a rougher cut opening to accept a metal receptacle for ice or whatever. The bar’s top had a piece of thick glass that sat atop a covering of thin green felt that was glued to the wooden surface. All in all a simple piece without noteworthy qualities but in its way perfect for college aged living.

It sat in the living room of a home in Cambridge, Massachusetts, where a perky nineteen-year-old girl was living with some classmates; the home was the girls’ summer sublet. I was an occasional visitor; that young lady had been occupying a fair amount of my time for several months.

I paid considerably more attention to that sweet young lady than to the bar even though I wished it were mine. It was not to be -- at summer’s end the girls returned to their dormitory, the students from whom they had sublet the house went on their own ways as the year’s lease ended, the bar was purchased from its tenant owner by my best friend for $25, far more discretionary cash than I had.

Three years later I owned the bar. My friend moved to a smaller apartment and sold it to me for that same $25 cash plus forgiveness of a debt of $5 the details of which neither of us could quite recall. The bar was not only reunited, as it were, with me but with that now twenty-two-year-old lovely young lady to whom I was newly married.

It stood close to a wall in our first apartment along with the two bar stools that were a part of the original package. The stools were four legged wooden pieces, the same color as the bar, but perhaps not originally homemade as they were a bit more sturdy than the bar and each had a woven reed seat.

Upon the bar we placed our first Christmas tree, a small evergreen that was more branch than tree which we decorated with tiny paper American flags and strings of popcorn and cranberries that we made one evening when with just a smile she persuaded me how much fun it would be. Within several days the cranberries softened and fell from the threads onto bar and floor.

By 1970, we and the bar had moved to the living quarters for residents and interns at a hospital in Worcester, forty miles to the west of where the bar and I had first made acquaintance. At a party one night the following year an intern had far too much to drink and fell into the bar, knocking it over and spilling the contents of its shelf onto the floor with resulting destruction of some fancy crystal that had been a wedding gift. Several months later the same intern, again having had far too much to drink elsewhere, ran his automobile into a tree and broke his arm.

The bar went with us wherever we went, to the coast of Massachusetts during a tour of duty in the Navy, to Philadelphia for two years while becoming trained in Emergency Medicine, and then to Putney, Vermont, where for a year we rented the home of a relatively unknown author who in a few years would become celebrated and famous.

We enjoyed soaking the labels off of wine bottles, writing on the back the details of the occasion at which the wine was enjoyed, and placing the labels display side up under the glass top of the bar. We had collected quite a few when something spilled, got under the glass top, and soaked the green felt covering which slowly began to mold and fall apart. Finally we stripped away the felt leaving the bar’s top plain brown wood and placed the labels in an envelope now long lost.

Somewhere along the way two rungs on one of the bar stools had broken which resulted in the stool being too wobbly for safe use. In May, 1977, we were living in a rented house in Gladwyne, a Philadelphia suburb.

I had no idea how to repair the stool to return it to usefulness. My sweetheart’s folks came for a weekend visit and her dad, knowing about our bar stool’s damage and well aware of my ineptness at manual skills brought along the necessaries for repair.

My father-in-law was a very interesting and wonderful fellow -- warm and embracing, a PhD in chemistry from Harvard, and a man who was without doubt in charge of his family. He and I had a very good relationship, never having exchanged a cross word nor having any disagreements save one time when he tried to repay a student loan his daughter had taken out before we were married. I told him that as a married couple we were now responsible for our debts and he, after some hesitation, stepped aside.

Not only was he a brilliant chemist with some patents to his name but he was skilled at carpentry, constructing things in a solid and utilitarian fashion. He took me down to the basement of the house and there he and I, using a method that I found ingenious, repaired the broken rungs. He led me along step by step, having me do all the actual work, so patient and kind in his manner that all these years later I consider it a very sweet memory indeed.

It was the last time I saw him. A few months later without warning he suddenly died, a tragedy that still resonates.

In 1998, our older son was a college sophomore moving into a dormitory suite with some classmates. He thought the bar would be a pleasing accessory, a happy addition to the usual furnishings. However, there was again a bar stool problem. The woven reed top of one had unraveled and deteriorated thereby becoming unusable.

It happened that my dad had a number of years earlier taken up the hobby of chair caning. He became quite skilled at it to the point that people would bring him chairs to be caned. He ignored my mom’s instructions to charge these folks for the service, asking only for the cost of materials. The enjoyment he derived from the caning exercise was payment enough for him. So he was the obvious person to ask to repair the seat.

By then, though, my dad was near eighty years old and his body and mind were beginning to fail. I had thought the simple repair of the seat would be a rewarding task for him but a couple of months after obtaining the necessary reeds he confessed that he just could no longer figure out how to effect the repair. My attempt to give him joy had instead brought him disappointment and embarrassment.

I went to the library, took out a book that instructed me how to weave the reeds and repaired the seat. The job was sloppy and amateurish but it was functional. My son took the bar and stools to college where it presumably did whatever it should have. I called my friend who had bought and sold it so many years earlier to inform him of the bar’s return to college life. He was pleased. “That’s what it’s for.”

At the end of the school year the bar returned to Manchester, back to the basement where it sits now, the experiences of its existence in a certain measure paralleling my own. I think of its relationship to two men of the preceding generation and of the resulting two memories, one sweet, one sour. The bar remains in its basement crypt while I return upstairs to daylight and carry on with a very fortunate life.


Originally in print in El Portal.

I smiled at the until now unknown reference to AAK.