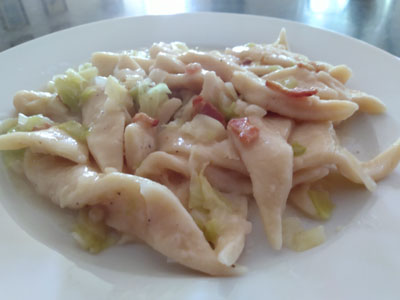 What do cabbage and I have in common? Some would say our exotic good looks and the acrid smell of sulfur when cooking, but I think there is something more fundamental and to the point -- we are both underappreciated, and at heart we are both Polish.

Cabbage just doesn't get a lot of respect. According to the tastewise.io, a "food and beverage platform for discovering trends, marketing opportunities" in the food service industry, very few people choose to order cabbage dishes, and only a fifth of the restaurants in this country even offer a cabbage dish, and cabbage is used in only one third of one percent of the recipes. I suspect that if you removed coleslaw from the list of cabbage dishes, that fifth would shrink considerably. Americans eat six times more corn than cabbage and eight times more potatoes than cabbage. ***

Obviously most people in this country are not Polish. In Poland, we eat a lot more cabbage than the Americans do. I grew up in Pittsburgh, a city in the remote part of Poland that borders Ohio. There, the signs in the windows of the grocery store were in Polish, you could buy a jar of ducks' blood for your czarnina (blood soup) at the poultry butcher shop, my dentist was Dr. Bartkiewicz, and the scent of cooking kapusta (cabbage) frequently wafted from the Polish Falcons' social hall, and yet despite being exposed to this way of life, and having been born into a family that mixed the blood of Pilarskis, Rygalskis, Pavlaks, Orzechkowski and more in a purely northern European blend, I grew up a white boy whose ethnic foods were pizza, burgers and fries, and frozen turkey potpies. If truth be known, I couldn't even bring myself to try the czarnina. This is all relevant (at least to me) in that recently I found myself hungry and in front of a refrigerator a long, long way from the Pittsburgh that I left fifty years ago, and I was looking at two heads of cabbage. Surely there had to be something in my distant Slavic ancestry that could get me a good meal. After a quick internet search, I found what I was looking for on a food blog called Polish Your Kitchen. Lazanki z kapusta ... cabbage and dumplings. The very idea stirred my Polish soul. And in the scheme of things, this is a relatively easy dish to make.


Let's start with the cabbage. You'll need the following ingredients:

Chop the cabbage into chunks (one inch by one inch pieces would be good, but don't worry about uniformity, just hack away at it so it no longer looks like a head of cabbage and looks like a pile of cabbage).

Toss the cabbage chunks into a good-sized pot. Add the two cups of water and a pinch of salt, bring it to a boil, then turn the heat down and let it slowly boil for about five minutes until the cabbage has softened but is not mushy. Remove from heat.

In the meantime, take the half pound of bacon, dice it, and throw it in a pan on medium heat to cook.

Dice the onion, throw it in with the bacon and continue to cook until you've got crispy bacon bits and nicely sauteed onions. When it's done, toss it in the pot with the cabbage, and just let that sit until you are ready with the dumplings.

For the dumplings you'll need:

First things first -- put about four quarts of water in a large pot and set that to medium heat.

In the bowl of a stand mixer, add flour, egg, and a half teaspoon of salt. Use a dough hook. Turn the mixer on to speed 3 and slowly begin adding the warm water a bit at a time until the dough forms a ball. You probably won't use all the water. You want the dough tacky but not wet.

When you've got a workable dough, take it out and knead it on a floured surface until it is smooth.

Roll out the dough to about one quarter of an inch. This may seem chunky, but remember, these are dumplings, not noodles.

Cut the dough into one-inch-wide strips, then cut again diagonally using your best guess as to how long you want your dumplings to be. I like mine about two inches long, but don't worry too much about uniformity here, dumplings by their very nature are irregularly shaped.

When you are done cutting, dust the dumpling nuggets lightly with flour and fluff them up so that they are not sticking to your board. Kick up the heat on your pot of water to medium high and make sure it's boiling. Add the dumplings to boiling water all at once and immediately stir them to keep them from sticking together. Boil until dumplings float to the surface.

Once they float, drain your dumplings in a colander, add a couple tablespoons of butter to the pot and return the dumplings to that pot. Stir around a bit to evenly distribute the butter.

Almost done. You need a quick roux. In a small pan, melt four tablespoons of butter. When it is melted, stir in three tablespoons of flour, and let it simmer for two minutes.

In the meantime, turn the heat back on under your cabbage, and when the roux is ready put that in the cabbage, add dumplings, and stir gently to combine. Keep the heat on this mixture until it just starts to thicken (only a couple of minutes). It should be nice and creamy. If it is too dry, add a little bit of water.

Salt and pepper to taste.

Boom! You've got yourself a flavorful, stick to your ribs meal that honors the lowly cabbage.

If Dr. Bartkiewicz was here, he and I would undoubtedly break into a chorus of "March, march, Dabrowski."

*** You can trust me on all these consumption numbers. I looked them up. If you want, just google "per capita consumption of (a vegetable) in (a country)." It's amazing what you'll find.

We often attended the Christmas fair at the local Polish church the lovely lady who ran our office was a member of. Kapusta was on the menu...kapusta/golumpki/pierogi. It was a lot of fun, BUT....I understood kapusta to be sauerkraut. But now I learn it's cabbage. I'm gonna have to call her up and get a clarification!

The recipe looks interesting, I may give it a try.