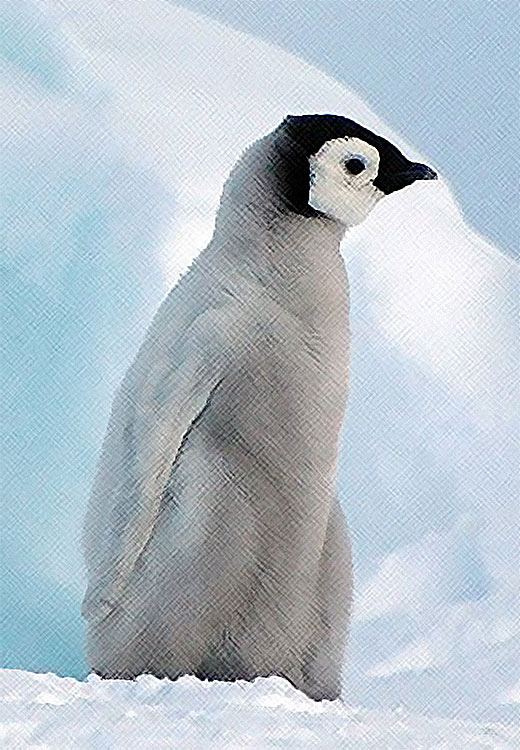 “Why don’t you write about penguins?”

“You said you haven’t been able to write anything for a long time now.”

“Yeah, well, I don’t know anything about penguins.”

“So? You write fiction. Just make it up.”

“Writing isn’t just about ‘making things up,’” I say. “I don’t just sit down with my laptop and say to myself ‘oh, let’s make things up today.’”

“Because I have to have something to say that’s relevant. I have to want to help my reader see a side of something that they might not otherwise get to see. So if I do write anything, it won’t be about goddamn penguins.”

“Penguins can be relevant.”

I don’t want to say more, but there is a something unfinished about this last utterance. It is an exclamation in which there is an inescapable implication of an eye roll.

“Told you it wasn’t just ‘ah’ and done. You’ve got something else to say.”

“Fine. What do you usually write about?”

“I write about the need for the individual to establish meaning in existence, how everything we do is really driven by our yearning to find our origin and to understand where we are headed.”

“Yes, although that makes it sound a little simple. The whole process of finding and understanding can get incredibly convoluted and there is a myriad of pitfalls along the way, but like a slice of migrating lemmings, we are driven to engage in the search even if at times it seems pointless.”

“Well, I mean, I don’t really understand the lemming analogy, but more to the point, you’re telling me you write these boy-meets-god stories because you know more about that than you do penguins?”

“So, you know more about people pursuing an abstract concept of a being that by its very definition is of a nature so radically different than yours that it exists outside of time and space than you know about penguins, beings that like you live on Earth, eat, drink, reproduce, care for their young, have good days and bad days, and photograph equally well in color or black and white?”

I feel uncomfortably like this is one of those ‘have you stopped beating your wife?’ questions to which there is no good answer. How do I respond that won’t make me sound like a pretentious religious zealot, where I don’t have to agree with the idea of God being an “abstract concept,” and I avoid being inappropriately dismissive of penguins?

“Look,” I say. “I don’t have any Gnostic well of knowledge that makes me better than anyone else, and I certainly can’t claim to be a model even for those who choose to believe as I believe, but there are things about people that just are. It’s like penguins, you know? Penguins live in Antarctica, and did you ever ask a penguin if that’s what he wanted? It’s a tough environment – it’s cold as hell, their kids are eaten by birds, and it’s not all that unusual to go out to dinner and yourself be eaten by a whale – but you still don’t see any penguins complaining about the high rents in Brooklyn, do you”

“Then you do know a few things about penguins.”

“Or did you just exercise a bit license with facts, eh?”

“I made a few assumptions, okay?”

I do not wish to answer.

“We could get a laptop and we could just make up some more stuff.”

“C’mon, think of it as a writing exercise.”

“Just listen for a second, okay? You got this penguin named Frank….”

“Frank is a stupid name for a penguin.”

“What’s a good name for a penguin?”

“It sounds like ice, so it helps to convey the whole idea of cold, which is a pretty big part of being a penguin.”

“That’s a start. So Bryce is standing on the edge of glacier, just staring out at the water while all the other penguins are jumping into the sea. A girl penguin, Sally, comes up to Bryce.”

“Nobody in the Antarctic is going to name their kid Sally.”

“As it happens, yes, but not because of St. Brigid, but because in keeping with the cold theme, it evokes the idea of frigid.”

“Is she frigid? Is Bryce depressed because he’s not getting any?”

“Perhaps Bryce’s feeling is better described as angst rather than depression, more of a foreboding than a despair.”

“An intuitiveness. Bryce’s gut is telling him there’s something ‘out there’ that is important, something that will help him to understand being a penguin.”

“And he’ll find meaning in his relationship with Brigid.”

“No, that’s the thing. She’s a knockout, and Bryce can’t keep his flippers off of her, not that that she seemed to mind, but she didn’t seem to be the type to want to settle down, nor did Bryce think he was ready to settle down, but he couldn’t seem to stay away from her. So as he stands on a rock and stares out into the ocean, the thought comes to him that he should ask her to join him on a nest, confident that if he did so, she would be scared away, ending the relationship, accomplishing that which he could not bring himself to do.”

“And does it scare her off?”

“Hell, no. She says yes. Turns out that despite her reputation as a coquette, she is depressed and disheartened to the point of despair, and she maintains that the relationship with Bryce has saved her life. The relationship proves mutually beneficial when shortly after the couple settle into their nest, Brigit saves Bryce from a polar bear that had snuck up on Bryce as he was sleeping.”

“Could if they wanted to.”

“They’re on the other end of the globe from penguins.”

“So maybe it wasn’t a polar bear.”

“It definitely wasn’t a polar bear, but it’s a good boy-meets-girl story. What’s the god part?”

“The ocean. The ocean is the source of penguin life, and it is the ocean that provides for them. In a mysterious and inexplicable way, the ocean gave Bryce the idea to invite Brigit to the nest knowing that she would say yes.”

“Uh-huh. The ocean is kind of the equivalent of the glasses on the omnipresent billboard of Dr. T.J. Ekleburg in The Great Gatsby, the all-seeing eyes of God?”

“Good. You’re going to write this, aren’t you?”

That’s the problem with arguing with one’s self – it never seems to give up. I’m not going to write about a fucking penguin with an existential crisis that is resolved by supernatural intervention. I’m just not, but there is a part of me that seems to insist that writing should be fun and playful. Bah. Frank Herbert never wrote about the penguins of Dune, did he? Tolstoy wasn’t concerned with War and Penguins. Harper Lee saw no point to killing a penguin.

“Oh, get over yourself.”

“You’ve already written your great American novel, which by default was American but could not even charitably be described as great, so like the pressure is off – your legacy is established. Have some fun. Find yourself a gray penguin.”

“Yeah, it’s not all black and white, not all great literature or trash. Sometimes it’s just funny, a joke.”

“I could write under a pseudonym.”

“It could get the creative juices flowing.”

“Just think about it.”

Lead me, O Gray Penguin, to the land of milk and money.

Article © Bernie Pilarski. All rights reserved.
Published on 2022-12-19
Image(s) are public domain.
3 Reader Comments
Ralph
12/19/2022
03:36:06 PM
Okay. Everytime I start to read one of your works, I have to remind myself that now I have to think, so sometimes I have to wait a bit until my usual brain fog lifts and it's clear sailing ahead. That's the way it is here; this is a very smart and subtle message about what makes art and what goes into such a process. It's not often I read anything that not only engages my mind but also makes me not make such a point out of who's a man and who's a woman and all the other whys and wheres and whats. In this case it's the idea that is the protagonist (that and a metaphysical penguin) and I enjoyed this fresh and unique way of telling a story very much.Kudos.
Lydia
12/20/2022
11:05:11 AM
Loved this writer's twisted thoughts. Ice and Frigid merging despite possibility of a random polar bear. Thanks for making me laugh at o'dark whilst burrowed in my blankets wondering when the furnace will push enough heat to my room to raise the temp over the 44 degrees currently on my digital thermometer.
Harvey
12/20/2022
08:08:49 PM
"Arguing with one's self" What a great job. A very fun (and interesting) read.