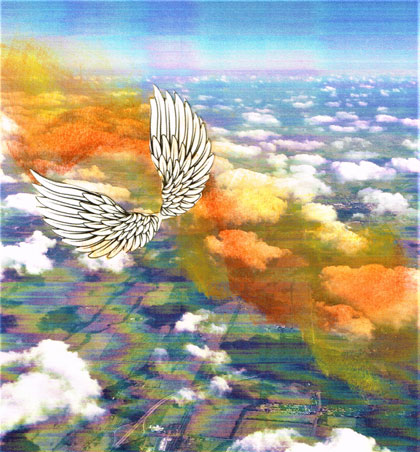 Before Divine became a spirit, she lived on another planet. Light years away. In the infinite openness of space. Her name mirrors the verb, divine, to perceive intuitively. Diverse intelligent creatures live on her unnamed planet. Communication is essential for survival because harsh weather conditions rule in her world. The planet’s inhabitants have learned they are doomed unless one works for all.

If there could be an earth analogy, Divine’s people take poisons and transform them into supper. A social utopia.

Divine died of natural causes while she journeyed alone during a rare quiet time. An unexpected storm won; her comrades couldn’t help. She joined other spirits in heaven where languages aren’t a barrier. Spirits don’t worry about differences. Not after they leave solid form. Love opens as life leaves its shell. When the individual is prepared for it.

“What?” Divine asks of newcomers from the earth. “War? What is that?” She talks to children who perished inside cages or died working as slaves.

A man who once had skin the color of the darkest part of the night sky, told her, “I believed I was nothing. I know now how wrong I was.”

Divine nods. One earth gentleman spirit soothes sudden newcomers, those who lived with mental and physical illnesses, immigrants who attempted to escape bombed homes, and the abused. He earned the name Soother.

Soother introduces Divine to a few well-known earth spirits. They tell her what she already knows.

“The best way to find yourself is to lose yourself in the service of others,” Mahatma Gandhi tells her.

Divine nods as Mother Teresa adds, “The hunger for love is much more difficult to remove than the hunger for bread.”

“Why do you ask about a place you have never known? Did you want to visit?” Soother asks. “Are you asking to be born again there?”

“You will never touch every surface of the earth. And you will need approval from the Creator of all the universes.”

“Of course. So, where do I go to find this Creator?”

“You don’t need to go anywhere. Creator hangs out.” Soother pauses and then laughs. “He is printing notes on your back. Now. Hanging in the space where your shoulders would be if you had them.” He snickers. “The messages are in my native language. Portuguese.”

“So, what does the message say?”

“You had better visit a place or two before you decide where you want to be born. I have a son who will help you out when you need it. He has a friend or two on the planet.”

“Close enough. Creator wants you to check out the scene first.”

“I’m guessing my language is a hint. I am your designated driver.”

“A term I learned from a colorful heavenly guest I met from New Jersey. I can explain that later. You have a lot to learn. Want to point to a spot or go random?”

In less than a millisecond Divine sees green, red, gold. A decorated tree in the center of a square space with white all over the ground. “Beautiful. Let’s check this place out.”

“Christmas is coming.” Soother explains the meaning behind the sparkle. “We’re in a city in what is called the Midwest United States.” He hesitates. “Some sparkle is honest. Some dazzle is commercial. That takes some explaining, too.”

Divine nods even though she doesn’t fully understand.

Soother takes her through towns and villages. “You will know when the place feels right.”

“Right for?” Divine watches the people walking on a street in the Southwest. Most of the people wear something covering the bottom of their faces. There is no white on the ground.

Soother answers her question before she asks. “An illness. It has affected many people on this planet. Masks help prevent the spread.”

A young couple walks by. Both the man and the woman have black shiny hair. They are shorter than many of the other people Divine has seen.

“But what if I get pregnant?” a young woman whispers to a young man. She shakes her head. “We have papers, Jose. I know. But ICE.” She shivers. “They will send us back if we blink too many times. We don’t have much here, one room, a cup, a plate. In Guatemala, we have nothing, no house, no village.”

Jose grabs her around the waist. “Maria, I can’t promise anything. But something good is close right now. I don’t know what it is. Something I can almost touch.”

Divine gasps. “Yes. This is where I am meant to be.”

“Are you sure?” Soother asks. Divine sighs. “Life was hard, but love was easy when I was alive. Somewhere else. But…now.”

“Tell Creator yourself,” Soother answers. “He’ll get the message. Quicker than words appeared across your back.”

“And Merry Christmas, whatever that is, Soother,” Divine says.

“Back at you. I’m needed upstairs. But I’ll be watching.” He disappears into universal heaven as Divine waits, wondering. She will have a fresh name. In time. Yet, how much of her will remain the same?

You Have a Pet What?
The World's Greatest Writers’ Store
I have no idea
Man with the Black Shirt
Glitter, High Class, and a Mission
Christmas in Lights, 1951
Double Ouch While Waiting for Double Pepperoni
For Pete's Sake
The Inside of a Ping Pong Ball
Meow, Grammatically Speaking
Contrast
One Man's Geriatric Valentine
Final Apology
One Mother's Day Party and Two Dads
The Unwelcome Christmas Invitation
Talk Is Cheap
Ann: The True Story of an Ordinary Woman with Extraordinary Determination
Christmas on Trash-in-the-Yard Boulevard
Three Charlies
Aunt Marty's Magic Coins
Dear Ruby: Four Unsent Letters
No Ordinary Recital
The Know-it-alls
How To Misread a Map
Aunt Brook's Less-than-grand Announcement
Sonnet by a Mature Woman
No Ordinary December Day
The Lone Blue Jay
Callie, Meet Callie
Scrabble, Off-the-Board