Terry Petersen writes with positive thinking in mind. Her motto: Dive through the muck of real life, but surface with a gem.

Only the bravest of hearts can offer a gift like this...

Full of color, a material that can be both strong and beautiful ...

Sometimes you have to leave the past behind. And yet there are other times that what we find in our memories helps us discover again what joy and forgiveness are all about...

One of the stages of grief is anger. Sometimes you don't even know its depth until you've acted upon it...

Did Great Grandma Tilly lose a valuable ring? Is this young narrator marrying into a genuinely crazy family?

Carson has a horrible secret, but he also has a friend. Because of her he has a chance...

Oh, what a girl wouldn't do for something sweet and delicious...

Esther waits for a single gift before she can know peace, and it arrives in an unexpected form.

Maybe she doesn't understand what she sees and hears, but she intuits that more is happening than the critical gossip team notices...

Resentment moves in a downward spiral, and everything begins to drag you deeper. But with a gift of an understanding ear, maybe hope has a chance to grow.

Six-year-old Jackie is quite a character. He brings second chances to the ultimate...

And all he could hope was that his old partner was still as nice...

Randy has a secret that doesn't excuse his actions, but it does explain them.

Sometimes events that seem unrelated connect. Lee is ten years old; she almost died when she was seven. But she celebrates the present. Someone needs to meet her, and doesn't know it yet... First, these unrelated events wait to be understood.

Cassie lives in what appears to be the perfect environment. It isn't. And the narrator is more than a fill-in at a monthly bridge game...

Morgan has had enough of her mother's neediness and her brother Ricky's poor choices. Someone has to take a new direction...

Sometimes bad intentions can backfire -- or lead to two steps backward and maybe one forward...

Cora has no place to go. An answer finds her, but it isn't what she would expect...

Welcome to October 2015, and BIZARRE Month in the Piker Press! Keep an eye on your computer, strange things can happen there...

Luther wasn't exactly human, but he is dead. He leaves behind a token that contains a power beyond anything even he could have expected.

Jess has only three additional family members; only one of them speaks to her. A connection with her daughter seems as likely as bringing Jess's husband Stan back from the dead. But something even more unexpected than a sudden ice storm is about to happen...

Bailey left home when she went to college, returning only for short visits. She believes Uncle Max's funeral will be another stop in dysfunctional land. But Max's one-track has led in directions Bailey has never fathomed...

Ricky is surviving on an inadequate paycheck. But his current problems seem to focus upon a mother who lives in la-la-land and a sister who wants to control his life.

Ingrid has been dead five years; she returns from the other side of life to meet with her husband, Mick. He doesn't know why she has come. Yet.

Charles teaches engaged couples how to communicate on a deeper level. But Charles has a secret he hides from himself. And it takes more than mind-reading to hear truth...

While her husband fights long lines of traffic blocked by an accident, Helen meets her blocked past ...

Luanne sees a kinship between a dead tree in an abandoned cemetery and her past. She decides to forget what cannot be retrieved and enjoy Jeff, the new love in her life...

Her life is made up of broken puzzle pieces. But she had a life, and she will remember it...

Kim seems to be anti-social. She isn't. She is using all her energy to hold on...

Baby listens to his aunt brag to his mommy, but Mommy has finally had enough...

Jack has made a promise to his grandson that he will make it to his violin recital, but Jack is not known for keeping his promises.

Trying to figure out what went wrong won't change the past, but what about the present?

Aunt Marty's niece Lacy doesn't have her aunt's gift for hearing the voices of the deceased. And she doesn't want it. The magic coins have a different plan for Lacy.

More than one Charlie lives in a nursing home, but they see the same place in different ways...

A feisty woman who doesn't expect much from the holidays is about to be surprised...

A psychologist appears to be willing to accept low fees rather than deal with insurance. However, Dr. Margaret Kale isn't who she seems to be...

Rose wants to forget her past -- even though it lives inside her and has affected her sense of who she is.

Mimi only has a father because her mother died when Mimi was a toddler. Her friend, Casey, has two fathers. The kindergarten class is having a special evening celebration for Mother's Day...

And when we're offered forgiveness, can we accept it?...

A conversation between two cats. One older and versed with feline skills...

Sometimes the student teaches the teacher...

An old woman with an answer-for-everything disposition doesn't curse. Her tongue carries enough acid without it.

This is why I have a comfy chair on the front porch...

The Second World War has destroyed their lives. Will there ever be another brightly-lit Christmas?

A vision of boundless love...

"...Daddy and Neighbor stood outside Daddy's car and discussed the world..."

"If peace were a bird, it would fly through heat or wind..."

"...I pray for your spirit to sing whenever gray clouds
meet inevitable dark patterns below..."

"...He celebrated the exquisite fit of her name to her personality..."

"...the enthusiasm innate to someone who knows... how to work for what she wants..."

With age comes experience, that is true. But years of experience shouldn't mask the wonder of the moment...

"...My words dissolve before they touch my tongue. But our past replays scenes..."

"...Because you are learning I will let you try that move again..."

"...if I could resurrect the past I would open both ears..."

"...above beer commercials and simultaneous conversations..."

"...listen to commentary about hate and racism..."

An example of how one easily dismissed individual has exceptional value. She is a prototype for many people, heroes and heroines in simple ways... 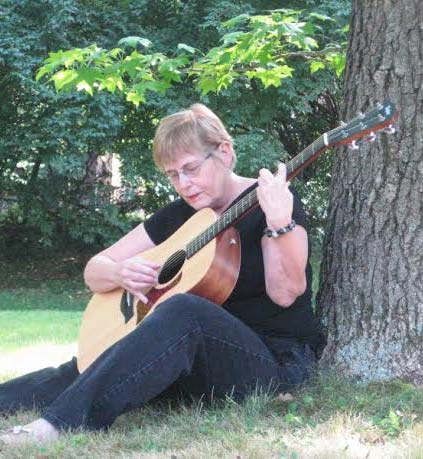 Terry Petersen focuses on the up side of life. When she published "Between Chester and Me" in February of 1998 in Dream Weaver Magazine, she had no idea she would someday have a special-needs granddaughter. Terry admits that she learns more from this little girl with Down syndrome than her granddaughter learns from her. In her mid-fifties Terry followed a life-long dream and learned to play guitar even though her fingers were gnarled with arthritis. She has played and sung her original songs at a local music cafe, a nursing home, and the YMCA. She has written songs to honor all three of her grandchildren. Music, writing, and life can all be hard work, but she finds them to be worth the effort. Terry is the facilitator for Hamilton Writers Guild, and is a member of the Greater Cincinnati Writers League and Queen City Writers.