Michael Price received his BA in Theater from the University of Minnesota in 1980 and has been writing fiction, primarily as a source of self entertainment, ever since. He performed his own one-man one-act play at the 2011 Minnesota Fringe Festival to considerable critical acclaim, has had a number of his short stories published in 2012, and recently finished his first novel, "Serpentine."

Now there's a kid who knows how to take care of his toys!

An atheist will tell you that there isn't any such thing as "Pearly Gates" -- so why be wary of what's on the other side of any door?

Who is that clever, handsome, rich -- and don't forget HOTT chappie over there? Yes, that one -- the one watching himself in the reflections of the window...

Let's take some time for culture. This way to the Museum of Muscle and Money...

We all start out in the dark, barely able to look around and see what we've got stored in there...

The clouds have moved in, time to sit by the window and ask the host which bottle is special today...

The adrenaline high, the pounding rhythm of footfalls, and the oh-so-glorious feeling of putting more and more air between you and your pursuers...

Bringing Death as a guest to every task isn't looked upon the best way to live your life, for who knows when Death will follow you home from the job?

It's never too late to go back to school...

Change is inevitable. But at the pinnacle of the perfect summer, changes aren't always what you think they'll be...

Just me, you, and the elephant in the room...cozy, isn't it?

Your fingers itch to be moving, your brain bulges with mental momentum, and there's that white screen staring you down...

You think you know him, have known him all his life...but what he has done in the world isn't half of what the world has done to him...

It was a bad idea to start with, but it turned out to be...much worse...

Still want your credential, do you?

If only he'd kept his temper, the store wouldn't have been closed...

"All the world's a stage, And all the men and women merely players; They have their exits and their entrances, and one man in his time plays many parts..." -- Shakespeare

Sometimes the Great Chasm that divides us makes it easier to communicate, after all...

This is Michael Price's last work to appear in the Piker Press. Mike died unexpectedly on February 12, 2016, and will be sorely missed. 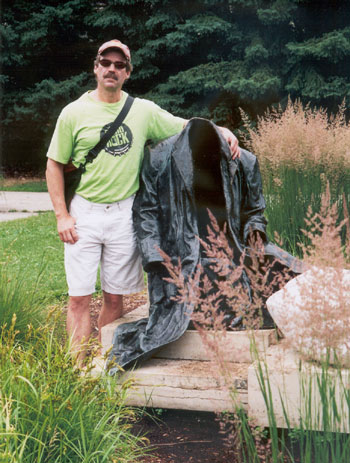 I grew up in suburban Minneapolis (MN) and attended Osseo Senior High, where I was known much more for my athletic successes than anything literary, and I was selected to play in two high school all-star games. I was also elected class treasurer -- for which I did absolutely nothing--a tenor soloist in an excellent high school choir, and an active participant in the school's theater department. I graduated in 1976.

I went to college on a football scholarship but immediately ripped up an ankle, was forced to miss my entire freshman year on the gridiron, a period in which I became heavily involved in The University of Minnesota's Theater department. I also worked for the first time as a waiter, made lots of cash, and was easily able to pay my own tuition. I gave back the football scholarship and graduated in less than four years. It was during this period that I began writing, and have been writing ever since.

My first pieces were almost entirely satirical in nature, but I never attempted publication. I like to say that I wrote for almost thirty years, strictly as a source of self-amusement/entertainment, before submitting anything. I went to graduate school in 1987, studied English Education, and broadened my scope as far as writing is concerned. I now write for the enjoyment of a very small audience -- me -- with hopes that other readers will find my work compelling as well.

I also have studied acting in L.A., worked as a photographic body model, and enjoy singing for weddings. When I'm not writing, my favorite thing to do is take the puzzle page of the local newspaper to the gym, work out, and do the Sudokus and crossword puzzles in between sets. I live with my long-time best friend, Pamela Veeder, an excellent nature photographer, in St. Paul, the capital of our beautiful state.