The place is post-revolutionary Russia, and a man called Lenin is changing its face. Valery Asimov, a former Russian diplomat, finds time running out as he tries to save what he loves ... Author Robert Earle returns us to the world of Dostoyevsky's "The Brothers Karamazov."

This is why he came back, a stranger in a land from the past -- so see the woman he loved so much, now changed by age and circumstance. What doesn't change ... is love.

Valery Asimov remembers the night of Ivan's death, how it affected them all, and the resolve it brought ...

Christina has nothing left but memories of Ivan -- except for the child she carries. That will have to be enough for her, but it isn't enough for Valery, who can only keep his grief at bay by taking care of the woman who loved his dear friend.

The birth of Deborah and a growing attachment to Tina begin to redefine Valery's world ...

"...he would dream extinction by water and waken to think about dreaming that and fall asleep and dream it again. He was in love with sailing and hated sailing..."

"Russia was caught with its pants down; its fleet was trapped like Antony and Cleopatra's fleet at Actium..."

In recounting their lost years together, Valery and Katerina Ivanovna lose track of time, remembering the struggle and the grief, the events that changed them forever...

Surely there is some normalcy left in the world -- surely Valery can at least get Katerina Ivanovna a little meal at the inn to fill her empty stomach ...

"...Russia's stolid core, retreating to its greatest strength, the great nyet that withstood Napoleon, was burned and yet lived, was frozen and yet lived, saying nyet to everything, enduring the unendurable with that one fierce word ... nyet, nyet, nyet ..."

Conclusion. Valery has obtained what passes for Lenin's writ, but it's not worth much in Russia, 1918, but it will enable him to take Katerina Ivanovna with him to America ... or so he believes.

A time of turmoil, a time of intrigue; the Czar is corrupt, and the winds of change are moving. Was Ivan a Karamazov any longer, or had he become an instrument of Fate? Valery Asimov, his only friend, follows Ivan on this post-Dostoyevskian trail across a strange continent ...

Before America, Ivan and Valery tested themselves -- in London, where Ivan's writings stirred an ants' nest of political figures ...

Researching Russian's stories on the streets of London, Ivan cannot abandon his cause -- but where will it lead him?

While Ivan researches and writes his essays on the monstrosity of Czarist Russia, Valery, at the embassy, begins to hear of an investigation that could prove their undoing...

London and Washington, Berlin and Russia are in the past. America is a vast country of promise and challenge. In fact, Ivan and Valery don't even need to reach their destination before challenge finds them...

Christina has run away from her husband -- what is she thinking, throwing her lot in with two subversive Russians?

Valery Asimov learns his place, both with the erstwhile Mrs. McGrath and the office of the Consul in San Francisco.

Ivan begins his work: to undermine the Czar's influence. But the darkness of his writing is in stark contrast to his life with Christina ...

An unwelcome face from the past appears in Valery's office, and another, strange but still unwelcome -- both looking for the same man ...

Ivan's past rushes toward him, carrying memory and loss from one direction, and worse from another -- murderous intent.

Oblivious to being followed by his would-be murderers, Ivan returns to the docks to look at the strangely familiar man on board the ship "Tiburon."

Ivan has found his brothers Mitya and Alexei -- family, suddenly, unexpectedly! How will he explain them to Christina?

Smedlov and Dickerson are closing in on Ivan, but to ensure Christina's safety, Ivan must take her to his brothers' house before he can make his escape.

Conclusion. Although he has never believed in God, or wanted to, for Christina's sake, Ivan brings their union before that imaginary being his brother worships so devoutly...

For three women, a journey to an exotic world will be a mission of mercy. For another the journey is a doorway to her past. Part One of Eight.

Greeted on their arrival in Zimbabwe by cholera death, Suzanne and the nurses must take stock of their journey to this place in order to understand the direction they must take. Part Two of Eight.

Hundreds of thousands of people were displaced when the shantytowns were destroyed; but when the walls came down, cholera was left behind. Who can live in luxury while people die?

Suzanne has had an idea lurking in her mind since she was a child, a dream of finding the ground that formed her, the air that gave her spirit...

They came to Harare to offer help -- desperately needed help -- why can't they give the help to those who reach out for it?

The work in the medical encampment is unending; so many people are sick the nurses will never be able to see them all. Yet this is exactly what has drawn them to this hopeless place...

The makeshift clinic has become the center of the nurses' lives, cholera a focal point of their attention. But it is Zimbabwe, and "cholera" is a word that is not to be mentioned...

Conclusion. The rioting mob at the clinic will be reported, and the meddling nurses will be blamed -- how dare they treat cholera patients! And now, what next? 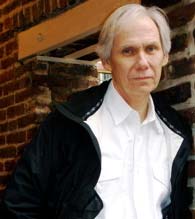 MC Writing published his e-format novel, The Man Clothed in Linen, in 2011. The Naval Institute Press published his narrative of a year in Iraq, Nights in the Pink Motel, in September 2008. DayBue Press published The Way Home, his first novel, in 2004. He was contributing co-editor of Identities in North America: Search for Community (Stanford, 1995).

Robert Earle has degrees in literature and fiction writing from Princeton and Johns Hopkins. For twenty-five years he was a U.S. diplomat and national security official.

With more than sixty stories and three novellas in print and online literary journals, Robert Earle is one of the more widely published short fiction writers in America. "In the Land of Zim" was inspired in part by two women committed to Africa and its peoples -- Jocelyn Kelly, Director of the Harvard Women in War Program for the Harvard Humanitarian Initiative, and Rosemary Feit Covey, internationally acclaimed artist, born in Johannesburg, South Africa.

He can be contacted directly at Raponikon@gmail.com.