Beer and Billiards A pool game gone awry in this tale of misspent youth.

The iShuffle offers the ability to quickly transfer information, photos, or music to what amounts to basically a portable hard drive. What? Yeah, don't worry. A hard-workin, motorcycle-ridin, non-Macintosh-using Texan brings you a product review for technology fans who don't necessarily know much about technology.

Tattoos and Piercings - Part one of the classic Piker two part series on things you can do your own flesh.

The classic Piker article on the care and history of body piercings.

Ok, so you find yourself on the slide from a relationship. You are a guy and you don't know how you are going to go on with life. Luckily for you, this biker has more than enough experience to point you into getting back into the swing of things.

Whether you call it the Ride Bell, Biker Bell or Grimling Bell, it's a classic part of biker mythos that everyone who throws a leg across should know.

Why do bikers wave to other bikers? Do they all know each other? Nope. It's one part courtesy, one part superstition.

How important is balance when riding a bike? Riding safely, especially at freeway speeds, isn't just a matter of not leaning too far to the left or right. Too much weight toward the front or the back can also have disastrous results.

The intrepid Ed comes out of writing retirement to share his experience of a once-in-a-lifetime concert event.

South Padre Island, TX - home of the Roar by the Shore. A rally from a biker's perspective. Good, clean fun and wienie biting.

The Harley-Davidson Open Road Tour travels around the world to celebrate over 100 years of the bike that's made history.

An old soul in a young body, this kid can really play the blues.

For three hours, our senses were assaulted and treated to a glimpse into the soul of these rock legends, gods if you will.

Has Jerry Jones finally given up on his meddlesome tricks? Will Bill Parcells be the breath of hope Cowboy fans have been waiting for all this time? And why the heck do they call him The Big Tuna?

Rules for Bikers and Autos to Get Along Biker Ed opens up the dialogue between those who ride motorcycles and those who don't by getting a few things off his chest.

In a special edition of the monthly column, Biker Ed opens up some perspective on the recent violence revolving around fans of Zakk Wylde and members of a local motorcycle club. A discussion about "colors" and the symbols that bikers wear.

What is the difference between Crotch Rockets, Cafe Racers, Riceburners and all those other strange terms for motorcycles?

A poem of betrayal and awakening.

A father looks to the future.

From the first time they saw each other, they knew their love was meant to be.

A poet finds his own way of coping with heartbreak.

Why does one go to a biker rally, and not take a motorcycle? To remind ourselves that it is not things that make one's life complete, but rather true friends and family. That's why this reporter went to the largest biker rally in the state of Texas and didn't even throw his leg over a bike.

Sure, anyone can play baseball all summer in the Major Leagues and make millions of dollars, but it takes a real man to teach a group of three year olds how to play the game.

A man's quest for a satisfactory razor begins in his youth. With the advent of the Mach 3 Power Nitro, this is one quest with a happy ending. Tough beard or sensitive skin, wet or dry, guy or gal, this seems to be the best in comfortable hair removal.

Ed gives us a brief metal history of the 80's Metal Scene, and then reviews the new album from Megadeth "Endgame" and he compares it to other musical works recently released.)

The worst nightmares aren't about monsters. When a motorcycle accident results in the loss of his arms, one man must ask the unthinkable of his family, rather than become a burden on his family. When morning comes, everything has profoundly changed for the better.

A gang of bikers stops to help Ed when his jeep dies along the side of the road. But there's more to these riders than meets the eye, and every favor has its price.

Take a seat behind the wheel of the number thirteen car in this action-packed tale of a rookie driver chasing NASCAR glory as he makes his bid to win the Daytona 500.

Vindication! The unscheduled pit stop proved to be a good decision after all. In the number thirteen car, Rob is starting to earn the respect of his pit crew and other drivers. The race is still young and strategy calls for teamwork on the track of the Daytona 500.

Inside the dark helmet, the rookie was in his haven, he was master of his own destiny. No harm could befall him whilst he was in his fortress. His breathing had returned to normal. His eyes were pinpoints as he went into a type of tunnel vision only seeing what was transpiring directly in front of him. He finally saw it, he could feel it, smell it, and taste it all at once. The Almighty Draft, he now knew how to conquer it. He now understood all those things that the legends had spoken of, when he was a youth. He was no longer afraid of going too fast. There was no such thing. Adrenaline began to pump through his veins instead of the normal red blood cells...

The conclusion of NASCAR Dreams.

Ever wonder just what it is they do when we're not home?

Once, long ago, they came to his rescue. Now, there is a price he must pay. How one mortal biker lives determines what will happen to him after he dies, on a lonely stretch of highway haunted by those on an eternal ride. Part 1 of 2

Tomorrow, there will be debts to pay, but for today, there's still one last sunset to ride off into. A fantasy concludes.

Joy-riding vacations before graduation are not a good idea, even if you have a pal with a ride who says he knows all about the locals ...

The battle is to the death, but who watches the fallen to steal away the vision of Valhalla?

Lovers walk together in the moonlight, but they have no idea what watches them from above ...

Edvard's last memory was of his own death in battle, but Valhalla couldn't be farther away from what he wakes up to ...

Time has passed for both Sonja and Edvard, in their vastly different states. But wait, something is not so different -- neither knows what their future will bring ...

Conclusion. Only the mummies stand in the way of Vlad's power-mad scheme -- can they hold him off long enough for the magical gate to close? 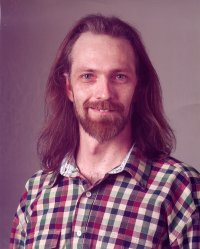 Biker Ed (a.k.a. Elrociam) was bred, born, and raised in Texas. He resides there, the father of three sons and two labrador dogs. He has been riding motorcycles as his main mode of transportation for over 10 years. His first motorcycle was a 1986 Yamaha Maxim 650. He has also ridden a 1988 Yamaha Maxim 1100, a Polaris Victory 1300, and is currently riding a Suzuki Savage 650.

When he isn't riding motorcycles, thinking of riding motorcycles, or thinking of ways to modify his motorcycle, he works in the IT Department of a worldwide corporation and is on call 24/7. He also plays MMORPG games in his spare time. He has alter egos known as Melron on the Fironia Vie server in Everquest, and in the World of Warcraft Universe. His latest love is Nascar Racing 2003 and he was for the PRT raceteam.

A High School drop out with his G.E.D. and two ex-wives, he attempts to improve the chances and choices that his children have on a daily basis. His quick wit, and ability to include self depricating humor into almost every aspect of his life, are some of the reasons he gives for being able to get through the dark 1990s and on into the aughts (00's). He has walked the darker side of the streets and alleyways, attempting to lighten the mood with a deadpan style of humor.

Weighing in at 175 pounds, and a couple of long hairs over 6'1", he recalls fairly easily the days of yore when things were different and he wishes that he could return to those times; if only to allow his children to grow up in a far more innocent time. Knowing that it is impossible, he desires to teach his children to use the tools that are avaible to them wisely. His main quote is "Example is better than advice."