Geistmann 3: To the Ends of the Earth, Chapter Twenty-seven 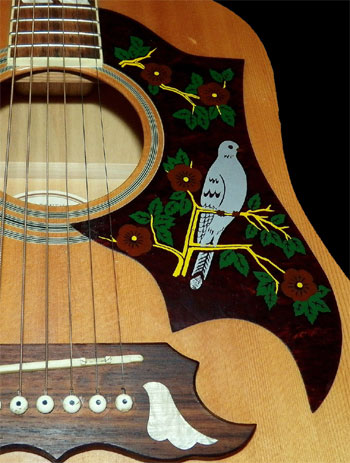 Since the light in the stall was dim, Geistmann prepared for the metamorphosis by spending a few seconds studying Screen #4, an illuminated view of the dark recesses of his ever-present green duffel bag. Then, without having to fumble, one by one, he extracted the items he would need. First came the portable mirror and light, and then the rest. As he checked to make sure everything was undamaged, Geistmann wondered whether to tune the guitar here, or wait until the performance.

"Now!" he decided, since one of his mantras was to leave as little as possible to chance. Realizing he could also test the new pick, and wearing only socks and underwear, he perched on the lid of the closed toilet seat, and not only tuned the guitar, but softly practiced the opening bars of the first song he intended to play. As he played and sang, he compared his performance with the one on Screen #3, the video he had sent to Weatherbee in 2008. He was delighted to observe that today's performance would take place only two days from the eleventh anniversary of the premier, which had been Thursday, March 6th, 2008.

Since he was a virtuoso multi-tasker, while he rehearsed and compared, Geistmann augmented his pleasure by splitting the screen further, so there were now three panels. The third was Screen #2, a detailed map of the route he had taken from Evanston to Asheville, with thumbnails for several notable stops. Among the roads he had traveled, and memorialized on Screen #2, was the Blue Ridge Parkway, which cut through Shenandoah Park, and skirted Charlottesville.

Perhaps the most memorable stop on the trip was Louisville, Kentucky, where he had spent forty-five minutes on Monday evening. There, he had "violated the temple" by eating a "Red Top" hot dog from a food cart, washed down with a bottle of the strong local ginger beer and, for dessert, three Xtra-Strength antacid tablets.

Wandering down Louisville's Frankfort Avenue (a coincidence, since it was chosen after he had purchased the meal), and trying to eat and drink without soiling his clothes or duffel bag, Geistmann had come upon a music store. Although it was after 9 p.m., since it was an unusually warm evening for early March, about 60 degrees Fahrenheit, the door of the establishment stood wide open. Out onto the street wafted the sounds of fine local music.

Walking through the display of instruments, both new and used, Geistmann was surprised to find the valuable merchandise unattended. The only item that tempted him was a used Gibson Dove Original, priced at 4K-plus. But the temptation was easy to resist, for three reasons: the wall on which the guitar was displayed was undoubtedly alarmed; Geistmann did not steal from worthy enterprises; and Elvis Presley, that song-robber extraordinaire, had played a Dove during his long "gig" in "Swindle City" (aka "Lost Wages"). But even so, the sight of the Dove, which looked to be in mint condition, was thrilling. Was it even more thrilling because the dove symbolized the Holy Ghost? All of that flashed through the mind of the unholy ghost, as he ambled through the delightful aisle.

Following the music to the back, he saw two gentlemen of a certain age, perhaps a decade older than he was, wearing their Sunday best, and sitting side-by-side on straight chairs. Joining the facing crowd, which appeared to be a mixture of locals and tourists, Geistmann was treated to a virtuoso performance of "dueling banjos." He resisted the urge to take his guitar from the duffle, and ask if they would allow him to turn their duo into a trio. But not only did he remember that this road trip through terra incognita was already exposing him to extreme risk, he was chary of leaving possible witnesses to his passage. So he stomped and clapped along with everyone else, then finished his meal (which he had secreted in the duffel) as he walked back to the car. With a twitch of apprehension, he started the engine, and continued down Route I-64 towards Lexington.

After regaling himself in the bathroom stall with the Louisville memory, Geistmann completed his transformation, mentally remarking that, to exchange his graying hair for his favorite color, flame red, and his drab clothing for the garish costume suited to the imminent performance, was not unlike the emergence of a butterfly from its chrysalis. The pasted-on sideburns would assure that the straw Stetson would not hide his hair color. Someplace along the long, winding road leading from Shenandoah to Asheville, he had lost the black Stetson. Also departing from the first performance, this time he would not wear a wig, preferring the unnatural-natural look.

As he left the restroom and began to slalom through the crowds again, Geistmann reviewed the facts he had learned from the website of Wolfe House (Screen #5), the actual, grandiose title of which was "Thomas Wolfe Memorial State Historical Site." Of course, his focus was on how these facts might affect his imminent visit. Once again, he split the screen, this time between #'s 5 and 1. And, once again, he kept track of the position of the mental cursor, charting his progress up the map.

He noted that the Historical Site was open today from 9-5, and wondered if, as a performer, he would be asked to pay the $5 entrance fee. Distance remaining, he noted, was .6 miles, which meant his ETA should be 1353 hours. Barely registering them, he sauntered past City Hall, the courthouse, churches, hotels, and the historic S & W Cafeteria building, which he knew the locals called "Dale's."

Geistmann's fact machine whirred, scanning other websites he had visited: Asheville, named for North Carolina Governor Sam Ashe, had been known to the Cherokees as "Land of the Sky." Relatively unscathed by the (very un -- civil) War Between the States, the place had since been reduced by capitalism to metaphoric ashes. In its current "revival," Asheville had resisted the hollowing out of much of rural America by becoming a genial, artsy-fartsy city of 90,000-plus, many of whom were transplants and/or retirees.

Returning to present realities, Geistmann asked himself why he had chosen not only to visit the Thomas Wolfe Memorial, but to make a show of himself, before fading, yet again, into invisibility. Why, indeed! In one of several previous incarnations, the place had been a boardinghouse named "the Old Kentucky Home." That name was not only unoriginal. It was geographically confusing, and derived from a racist song about a horse race.

Nor was he a fan of Look Homeward, Angel, Wolfe's bloated "masterpiece." If anything, Geistmann 's witty and pithy art was the stylistic antithesis of Wolfe's. No, it was not the book, but its principal theme, that drew him like a magnet. Like Wolfe, Armande Arnouche had always felt himself to be an exile. Had he, a lone wolf, ever dwelled in a place he could call home?