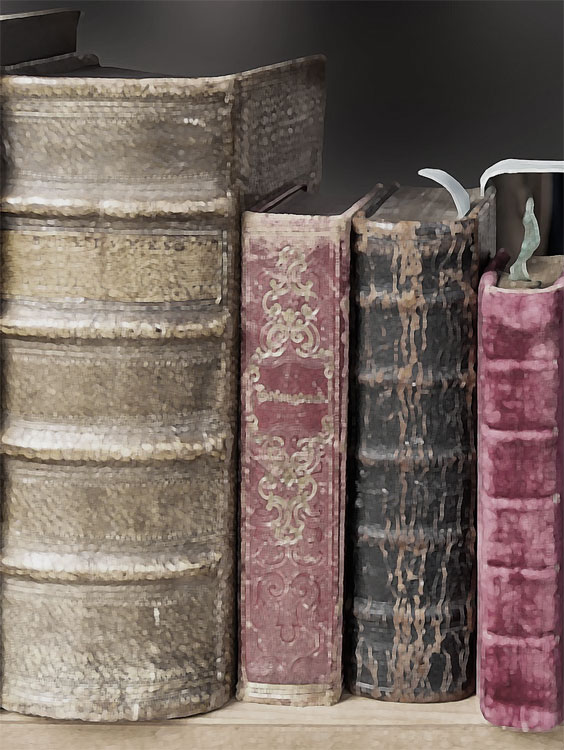 Ever since he murdered his hobby, Robinson’s life had been gray. In the five years since he had shot and killed Armande Amrouche, at the Thomas Wolfe Memorial State Historical Site, in Asheville, North Carolina, Robinson had occupied himself with work and family. But, as hard as he tried, these pursuits could not absorb his full interest. From 2008 until 2019, or “The Geistmann Years,” as he thought of them, his life had been rich in colorful incident. Now, it was gray.

Did Robinson feel guilty for murdering Geistmann? Not really. At the time, he recalled, he had pulled the trigger before one of the madman’s legion of enemies (such as the yakuza, Harito “Harry” Yurei) might have dispatched him with far more painful ingenuity, or the FBI might have locked him up and thrown away the key, which living death would also have been much crueler than Robinson’s “double tap.” Not that the librarian had been moved solely by humanitarian considerations. Whatever way you looked at it, Geistmann’s time had come. He had to go.

Reluctantly, Robinson had returned from Asheville, the scene of the crime, or the scene that ended the crimes, to the (ho- hum) most exciting city in the world, and to his day job in the Rare Books Division of Columbia University libraries. Of the myriad unfinished tasks he had resumed, perhaps the least gray was the one in which he had been engaged, during 2013, in a black African country, Mali, and in a Technicolor country, South Africa. His expertise in the field of incunabula had been the reason (or pretext) for his call to Africa.

Robinson’s work in Mali and South Africa had been as researcher, collator, cataloguer, and translator for a book preservation initiative, the Timbuktu Manuscripts Projects. Clever Fred Neugeborn who was, at the time, working for the FBI’s Behavioral Analysis Unit, had used the TMI job to lure Robinson to Africa. He had kept at the job even as he helped the “Feebs” track and destroy the Pan-African Cartel, a criminal syndicate. That operation had been expeditiously completed within two months, but the TMI “beard” had never lost its appeal for the librarian.

On May 1st, 2025, six years after Geistmann’s assassination, Robinson was nodding off at his desk in the RBD when his computer beeped. In this, the aftermath of the seventh or eighth wave of the Covid pandemic, Robinson’s response was conditioned by the constant flood of ads for debt relief, travel, weight loss, sex partners, virility enhancers, and other such detritus, which washed up with each new wave of the virus. His right middle finger was poised above the “Delete” button. But having inadvertently deleted several important (or semi-important) pieces of professional information during the past few days, Robinson un-nodded, kept the finger aloft, and read the “Subject” line of the new message.

Subject: Come back to Cape Town, John! We need you.

As Robinson knew, about eighteen months before, Dr. Mzamene had replaced the previous TMI Director, Shamil Jeppie, who was transferred to Mali, where he became the local co-Director of the TMP project.

The To line was also of interest. In addition to himself, jrob@columbialibraries.edu, there was a second addressee, his old F.B.I. pal, fneugeborn@vicap.fbi.gov.

Appetite fully aroused, the curious librarian devoured the message, annotating as he read:

AKH [Dr. Abdel Kader Haidara, TMP co-Director in Timbuktu] has just shipped to us [not by ship] a fragment of a block book, 11th-12th century c.e. Either the schleppers or the Ansar Dine’ broke this object, which is where you come in, John. [Yikes!] As a world-class incunabulist [arrant flattery!], might you be able to come to CT to help us w/the specific I.D., pursuant, in turn, to repairing the b.b.? To whet your interest further, we were able to read the book’s inscription:

There followed a phrase in Arabic script, which Robinson transliterated as rajul shabah, which translated to “Ghost Man.” As he knew, Ansar Dine’ were the Islamic iconoclasts whose depredations in Mali had sparked the Timbuktu Manuscripts Project. Ignoring Dr. Mzamene’s flattery, jokes, etc., Robinson immediately googled South African Airways.

Having booked a flight for the following week, Wednesday - Thursday, May 7 - 8, he addressed other essential logistical details. First, and most difficult, were those involving his family. After dinner, when he told his life partner, Judy Wolfe-Robinson, about the invitation, her initial reaction was predictable: “Here we go -- you go -- again!”

Over the ensuing days, to placate her, Robinson made use of the tried-and-true. First, he demonstrated (for the umpteenth time) what a model husband he was. Extra duties included picking up the kids (George, ten, and Amy, nine) from their school, in the middle of the afternoon (inconvenient for both parents), cooking elaborate dinners (even when it was Judy’s turn), and flying solo at two “emergency” P.T.A. meetings, while she worked late, because her Agency had its own emergency. Both “emergencies” concerned the latest return to The (latest) New Normal.

Robinson’s tactics were only partly successful. “Okay,” Judy said, the day before his flight was scheduled to depart. “Go ahead, John. Go chase your ghosts. But if you’re not home by one month from today ... ” -- she consulted her SmartPhone calendar—” ... by June 6th, don’t bother coming home, at all.”

Prudence kept Robinson from pointing out that, if he were to miss her deadline, it would mean she had shed two husbands (three, including their first divorce), probably a sign that she was unfit for married life. Although he had not looked it up, he guessed that the re-re-marriage rate for women must be below 10%, and that the re-re-re rate had to be tiny. Since Judy’s declaration came during the morning coffee ritual (before they woke the kids for school), he wondered what she would have thrown at him, if he had made this point.

Robinson’s second ploy, also hoary, was an appeal to shared values. Simply put, how could Judy, the CEO of an educational NGO, stand in the way of his efforts to save an endangered literary species? As for her final line of defence, “But again, John?” when did progressives ever have the luxury of declaring final victory and leaving the field of battle? Eventually, kicking, screaming, and insisting that her surrender was only provisional, Judy capitulated.

Job logistics were more straightforward. Since his boss, Ian Bostridge, would assume that the TMP, and/or some other org (the FBI) would be footing the bill for this junket, and since the summer term was manageable without Robinson (especially without his salary), the boss’s blessing was readily conferred. In fact, Robinson wondered whether, in his heart, Bostridge hoped that, this time, his adventurous (and tenured) underling might finally disappear for good, which would open the Departmental budget line to someone younger -- and cheaper.