Geistmann 3: To the Ends of the Earth, Chapter Twenty-nine 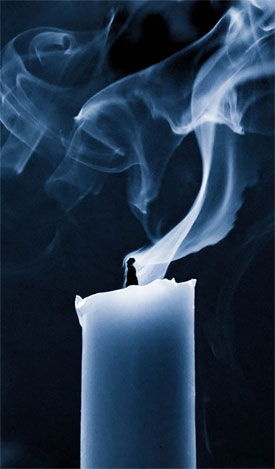 With a sense of doom, and wondering why he had not yet been attacked, Geistmann raced up the circular staircase to the second floor. Oh, well, what did the world need with an aging assassin? Had he been an Eskimo, his family would already have deposited him on an iceberg. (Were there any left?)

When he had set himself up on a straight chair in the second-floor parlor, his inner clock told him it was 1415. Only one person sat before him, his old friend and enemy, John Robinson. Dressed in wide-wale brown corduroy trousers and a beige canvas work jacket, Robinson also wore a rictus-like smile.

Geistmann cleared his throat, picked out the eight-bar Introduction, and started to sing. Perhaps because he knew that time was short, he began with the second stanza:

Oh, Shenandoah, I love your daughter,
Away, you rolling river ...

From the corner of his eye, he saw Robinson take an automatic pistol from his right-jacket pocket. He stopped singing.

"Well, well, John. At least, it's not one of those FBI-issued guns. I bet I know where you got it -- from Mr. Sincowicz. But how did you manage to smuggle it onto the airplane?" "

I didn't have to. He referred me to an associate in Charlotte."

Mr. Sincowicz was that rara avis, a kindhearted pawnbroker. Soon after Robinson had returned from Africa, he discovered that this man, whose family had emigrated from Poland around 1900, was a fellow bibliophile. They became friends. The pawnshop was just below Morningside Park, ten minutes from the University. About once a month, during lunch hour, Robinson would walk down to the shop, where he and the pawnbroker would swap recommendations.

As he also discovered, Mr. Sincowicz was a philanthropist, of sorts. That is, he made small, supposedly temporary loans to neighbors who were "caught short." In 2016, when local gangsters cottoned onto this infringement into their business, after one or two warnings, they smashed Mr. Sinkiewicz's right kneecap with a sledgehammer.

Robinson then enlisted the professional services of Geistmann, who overreacted, as usual, smashing both kneecaps of each of the gang's governing triad -- six knees, in all. Since the assailant had silently entered each man's bedroom in the wee hours, then chloroformed both the victim and his bed partner, they never knew who had hit them. Afterwards, the gang leaders, too, had overreacted, executing three members of a rival gang in drive-by shootings.

And why, contrary to Fred Neugeborn's instructions, was Robinson now determined to kill Geistmann? Not, certainly, at the behest of Scott Peters or any of the other minions of the man Judy called "the POS." No, the decision hearkened back to something Dr. Shamil Jeppie, his supervisor at the University of Cape Town's Timbuktu Manuscripts Project, had said, in 2013. When Robinson had fulminated against the Malian book-destroyers, and imagined several Geistmann-like contrapassi, Dr. Jeppie had smiled, and said, "Oh, well, John, everyone in Africa seems to have someone with whom they would like to get even. And so many of the terrible things that happen here are everyone's fault, and so, in a sense nobody's."

For once, Robinson had not had a ready reply. In the six years since, Dr. Jeppie's generalization had been extended to the ends of the earth, not only by Geistmann, but by countless other wreakers of havoc. So the time had come for Robinson to act upon his growing conviction thar Dr. Jeppie had been right.

He also had a second motive. The friendly feelings he had developed toward Geistmann over eleven years, the feelings that had changed the madman from an adversary to a sometime associate, and even a friend, had confirmed what he had already known in the Chisinau dungeon: that imprisonment, to this flawed free spirit, would have been worse than death.

"Isn't it still 'a pleasure speaking with an intelligent man,' John?" Robinson did not reply. "Oh, well, then: 'He lived and died with the courage of a purpose which reaches far beyond himself and which effectively destroys the barbarism and defeatism of the age we live in.' Remember that one, John? Hint: don't spend it all in one place! Two taps, please."

Robinson obliged. "Stephen Spender." Aiming for the mid-section, he managed to hit Geistmann with both shots, the first in his upper torso, and the second, fatally, in the throat. The guitar fell to the ground with a final, discordant clatter, and the corpse "came tumbling after."

Simultaneously with the second report, from the door of a janitor's closet burst the oyabun, Harito Yurei. Stepping over the body, he bowed deeply to Robinson, who still held the smoking gun in his hand. Robinson had been told about the oyabun, and that he might be present, but he was still surprised to be confronted by a crazed-looking middle-aged Japanese wearing a fancy business suit that was soiled and wrinkled. The yakuza looked as if he had become unhinged by the slaughter of Kaito, who had been described as his master's favorite bodyguard and surrogate son.

Robinson's surmise was correct. Harrowed all the way from Kyoto to Asheville by Kate's unquiet spirit, which must have deemed his master's obsequies at the shrine inadequate, when he saw Geistmann lying in a pool of blood, with his face obliterated, and realized he had arrived too late to avenge Kate's murder, a vital connection in the yakuza's mind snapped.

"How do you do, sir?" he asked, in his careful schoolboy English. "My name is Harito Yurei, and I represent Takaguchi-Gumi organization." Robinson was far too stunned to process what he was hearing. The oblivious oyabun continued reciting what sounded like a prepared speech. "I am aware that this may not be the opportune time to make you a business offer, sir."

He paused, and Robinson heard footsteps pounding through the corridor outside the parlor, from both directions. Yurei pressed on. "But, in very few seconds, when the authorities of law burst into this room, I possess the means to protect you from them." Then, he decided to extemporize with a phrase he had heard in movies and on TV shows. "You see, my friend, I have powerful friends in high places."

When Robinson, still in shock, did not react, Yurei returned to the script, speeding up. "I am also prepared to make you two attractive business offers. The first one is, two Japanese research projects have openings for a man such as yourself: the Japan Disasters Archive, which our government created after our triple disaster of 2011; and the Japanese Constitutional Revision Research Project. Both projects are affiliated with Harvard University." Robinson still showed no visible reaction. "Of course, I have an influence to assure that you are taken on for either, or both, of these projects."

The oyabun plunged ahead. "Furthermore, I wonder if you have the stuff it takes" (another phrase from pop culture) "to possibly become my anointed successor. At first, of course, this demanding position can be divided between us, myself remaining in charge of Operations, and you serving as my Director of Research."

As Robinson opened his mouth to say ... he did not know what, seven doors to the parlor sprang open almost simultaneously. Into the room, one through each door, flew several contingents: the SWAT team and half a dozen representatives of local law enforcement; Fred Neugeborn and Johanna Stark, leading the FBI team of ten; five enormous Asians; Scott Peters and Bill Nichols, his friend from the Charlotte office of the FBI; a brace of jowly, unshaven Central or Eastern Europeans in matching shiny blue suits; a vast black South African; and, finally, two lunging police dogs, with their handlers straining to keep them on the leash. Other than the dogs, all of these contingents were heavily, and variously, armed. The oyabun stepped away from Robinson, who drew a deep breath, and finally lowered the pistol.

Later that day, Fred Neugeborn made a handwritten list of some of the most notable, and still potentially dangerous, criminals Geistmann had left behind:

Edip Kasun and Dusko Stankovic (brothers of the Serbian colonels)

Surviving leaders (?#) of the Takaguchi-Gumi organization

Just before midnight, Fred put out the lights, and went home. It had been a long day, even for him, and an unsuccessful one.

In December 2019, what was to become the coronavirus pandemic broke out in China. If the showdown in Ashevlle had been scheduled for nine months later, it would not have happened! In that case, Geistmann might still have been with us ...